Paintball teams prep for nationals at MSXL event in Louisville 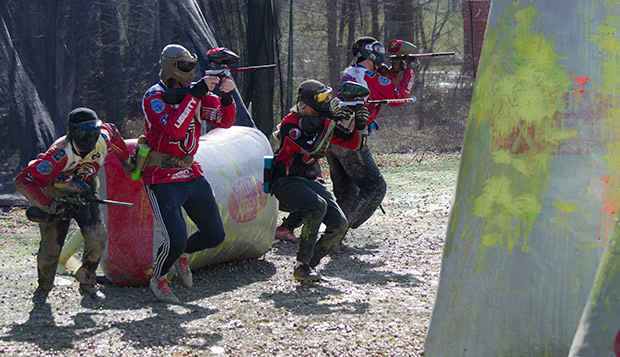 A Flames line breaks out on attack at the MSXL Opener last weekend in Louisville, Ky.

"It was more like an exhibition tournament for us," Davidson said, noting that there was only one other collegiate program, Missouri S&T, among the dozens of teams and hundreds of players in the field. "There were a lot of regional players who have been on their teams for five to seven years competing together. It was a bit more competitive format than we were used to and a good challenge."

Liberty's Gold line, which normally competes at the Class A level, played in Division 3, the highest level at the Louisville tournament. The Flames, featuring graduates Christian Campbell and David Dickerson, sophomores Kyle Babb and Josh Montanari, and junior Corbin Ryan with backup from sophomore Austin Larson and senior Jonathan Yeo, went 0-4 in their preliminary matches (losing by 4-0, 4-1, 4-1, and 3-2 scores) to finish last out of 18 teams.

"That was not what we were hoping for, but it was good for them to have some competition and feel what it's like to lose," Davidson said. "We win almost every Class A event we go to and it is easy to get comfortable and complacent. This was a good experience for them to learn how to overcome a loss."

"They were third out of five teams in their pool play, so they didn't make it out of their bracket, but this was the first time many of those guys had played Xball, tournament-style paintball," Davidson said. "It is definitely a learning experience. The competition was much higher than they will face at the Class AA level at nationals, so I'm excited to see how they do there."

Division 6 featured a three-man bracket play. Davidson put freshman Braden Murphy, sophomore Derek Hassan, and junior Chris Hartzog together from his red line, which had failed to win a single point at the team's Class AA tournament near Atlanta. The Flames finished 3-1 in preliminary play to make it out of their bracket before losing their first match and placing sixth out of 12 teams.

"There are a lot of new guys this season that are impressing me and stepping up their games, giving the upperclassmen a challenge for their spots," Davidson said.

The Flames also used paintball fields as their mission field over the weekend.

"While the outcome wasn't optimal, it was a good opportunity for us to shine a light in such a dark sport," Davidson said. "The main goal for our team is to share Christ."

The Flames will host one final Class A Event on April 14-15 at the Liberty Paintball Fields, when Davidson expects to compete against teams from Kennesaw State, North Carolina State, East Carolina, and Clemson, before taking his Class A line and two Class AA lines (a total of 19 players) to nationals the following Wednesday.