Flames rise to No. 10 in MCLA Division I rankings, await GWU 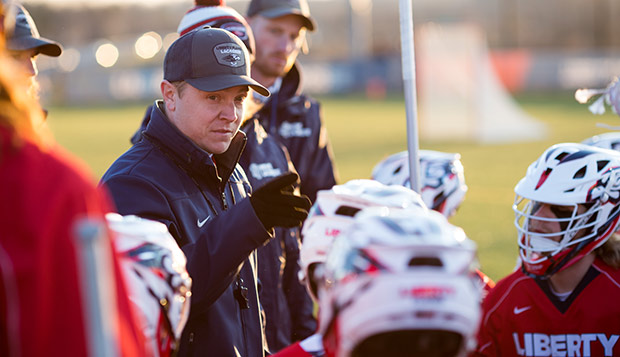 Liberty Head Coach Kyle McQuillan has the Flames ranked in the top 10 for the first time this year. (Photo by Nathan Spencer)

A weekend split against Top 20-ranked opponents at the "Battle at the Beach" in Frederica, Del., capped by a 9-8 upset of No. 4 Michigan State on Saturday, lifted Liberty University's men's lacrosse team one spot to No. 10 in this week's MCLA Division I Coaches Poll.

Liberty will then welcome unranked Pittsburgh in its sixth annual "Midnight Mayhem" contest next Friday starting at 11:59 p.m. before concluding the regular season at home against its biggest rival, No. 9-ranked Virginia Tech, on Friday, April 13.

If both the Flames and Hokies win out in conference play, that game will determine the top seed out of the Northwest Region into the April 20-22 SELC Championships in Atlanta, where an autobid to the May 7-12 MCLA National Championships will be at stake.