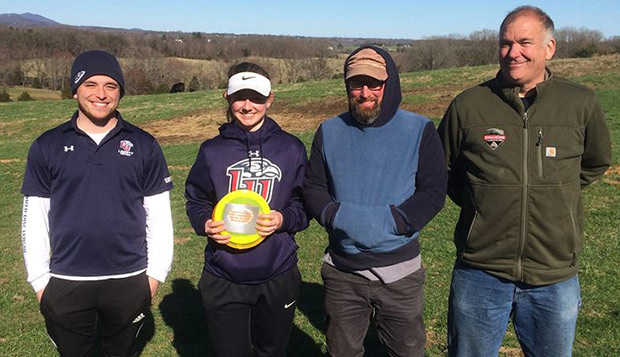 Graduate Heather Wyatt was the Ladies overall champion after winning her third consecutive BRAWL tournament at Timber Ridge, with rounds of 77 and 39 for a 116-shot score. Her final 58-point total was more than double that of Lady Flames alumna Hannah Croke (25) and two current teammates — junior Hannah Trotz, who placed third at Timber Ridge (80-40-120) and third overall with 20 points, and sophomore Savanna Fox (fourth overall, 17 points).

Junior Hunter Thomas was Liberty's only representative in the Open Division and moved up from eighth to fifth place in the final standings by firing rounds of 59 and 30 for an 89-shot runner-up finish at Timber Ridge, which added 23 points to his final 84-point total.

Flames freshman Peter Curran, who also plays on Liberty's men's Ultimate team and only competed in two of the eight BRAWL tournaments, won the Amateur division at Timber Ridge with rounds of 58 and 30 for an 88 total, padding 38 points onto his season point total of 65.

Shumate earned 34 points with his runner-up finish (61-29-90), bringing his season point total to 202 and securing the overall amateur division championship. He held off graduate Jeremy Miekley (65-29-94), who finished fourth at Timber Ridge for 28.5 points, clinching his overall runner-up showing for the season with 171.

On March 10, Liberty competed in a tournament at Clemson on March 10, with its top two men's foursomes placing fifth and sixth out of 17 teams.

Ferris State (Mich.) won the event with 318 strokes followed by Clemson's B squad (322), the host Tigers' A lineup (331), and North Carolina State's A team (339). Liberty's A flight finished fifth with a combined score of 344, paced by Thomas, who placed seventh individually with a round of 55, junior Ryan Shumate (12th, 57), and Miekley (16th, 58). The Flames' B team was sixth with a 354 total, one shot in front of South Carolina and two ahead of Georgia Southern.

Head Coach Steve Bowman will take all 12 Flames players and all seven Lady Flames to form three men's foursomes and two women's teams for this weekend's Tri-State Challenge at Cedar Rock Park in Burlington, N.C., where Clemson and North Carolina will be two of Liberty's top competitors.

They will use the tournament as a final tune-up and to determine championship and first- and second-flight lineups for the USDG Collegiate National Championships, set for April 11-14 at the Hippodrome Disc Golf Complex in North Augusta, S.C.