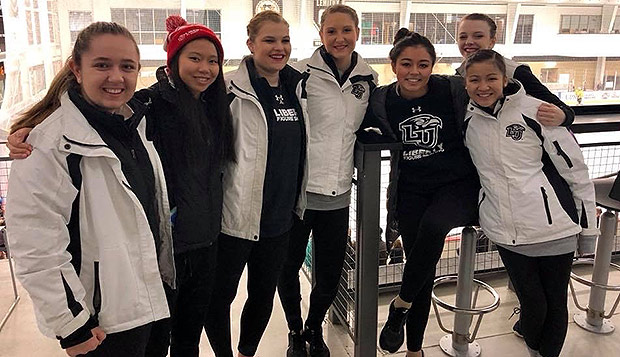 A dozen members of Liberty University's figure skating team closed out their competitive season with an eighth-place showing out of 20 teams at the final Eastern Sectional competition, last Saturday and Sunday at Carnegie-Mellon in Pittsburgh.

Junior intermediate skater Sibylle Harter paced the Lady Flames with two second-place finishes for a total of eight of the team's 28.5 points on the weekend.

Delaware won the team competition with 129 points, followed by Boston University (118), Dartmouth (87), and Sacred Heart and Connecticut, which tied for fourth with 52.5 points each. The top four teams in the final season standings qualified for U.S. Figure Skating Collegiate Nationals with Sacred Heart edging UConn in a tie-breaker.

Lady Flames freshman Angela Bosher turned in an outstanding performance in her Novice short program and earned fifth place before skating an even cleaner routine in the long program and placing third for a total of four team points.

Liberty junior Cami Burkhardt added 3.5 team points after tying for third with a delightful Argentine Waltz in her Junior dance routine before finishing fourth in her Senior long free skate.

"Our Low-Team Maneuvers group had a fantastic showing and placed third," Liberty Head Coach Dawn Harter said, noting the Lady Flames' Intermediate team made some costly errors that placed them behind teams they had finished ahead of in the two previous sectionals.

Junior newcomers Christa Lesher and LeAnn Fung skated in competition for the first time. Lesher turned in a terrific Pre-Preliminary program with a minor mishap at the end that placed her sixth out of nine skaters. Fung, an Intermediate skater returning to the ice from an injury sustained in the fall semester, placed eighth out of 10 skaters.

"We look forward to next season with all of our returning skaters," Dawn Harter said. "We leave this season with our heads held high and an optimistic outlook for next year."