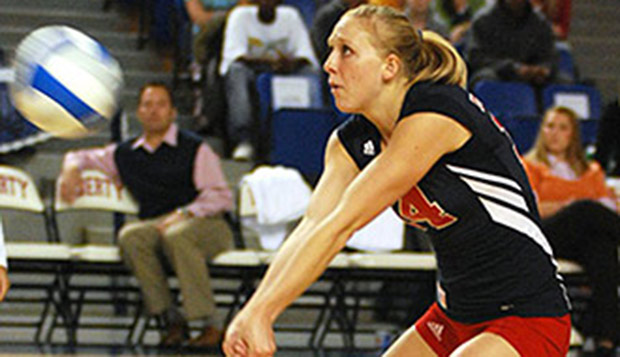 Jessica Nelson makes a dig during a match with Liberty's NCAA Division I indoor women's volleyball team in the mid-2000s.

"She'll be a huge addition for our coaching staff and a great role model for our players," VanDePerre said. "She's played at a high level, knows Liberty, and has been phenomenal, just for her experience and how she has connected so well with our players right away. She brings a serious approach to the sport, but still makes it fun."

Nelson was raised near Tokyo, Japan before graduating from Faith Academy in the Philippines. As a freshman at Liberty in 2004, she played outside hitter for the Lady Flames indoor volleyball team with former Liberty beach volleyball Head Coach Rachel Willis.

After Nelson graduated with a B.S. in Family and Child Development in 2008 and a Masters in Human Services Counseling with a concentration in Marriage and Family Counseling in 2009, she worked as athletics coordinator at Houghton (N.Y.) Academy, where her father, John Nelson, is the headmaster.

At Liberty, she hopes to involve the beach team in overseas outreach.

"I have experienced firsthand how Liberty can influence people in carrying out the Great Commission," Nelson said. "We have a huge passion for the spiritual development of players and that's exciting. We want to increase global awareness for the athletes so they will have an opportunity to make an impact worldwide."

To start its season, Liberty will send five women's and three men's duos to Saturday's first tournament of the spring season, the Beach South Volleyball Club's Volley America season-opener in Greensboro, N.C. VanDePerre expects about 35 teams competing in men's and women's Open and AA divisions, including collegiate entries from North Carolina State, though inclement weather forecasts could keep some away.

"Nothing says beach volleyball like snow flurries," VanDePerre said. Temperatures are projected to top out in the 40-degree range with rain possible. "We're just going to go and make the best of it. It will be a good test of our grit and opportunity to practice our positive thinking."