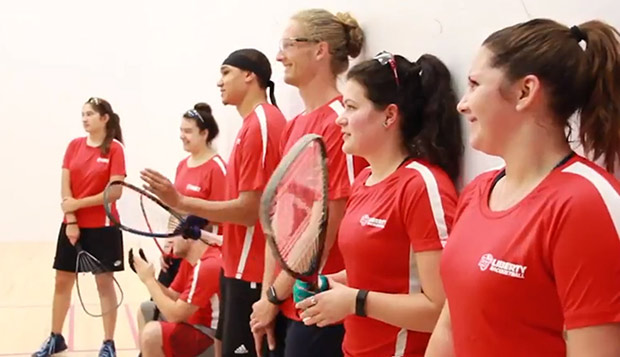 Liberty University's racquetball team sent its largest squad to date to this past week's USA Racquetball Intercollegiate National Championships, hosted by the University of Minnesota. Nine team members — five Flames and four Lady Flames — won a total of 12 singles and doubles medals for top-four finishes, and Head Coach Danny Rodriguez was honored as Coach of the Year by USA Racquetball, the sport's national governing body.

Rodriguez, who was instrumental in establishing Liberty's program in 2011, is an American Professional Racquetball Organization (AmPRO) Level 3-certified coach and instructor who has served as a Club Pro at many facilities.

"Since the team originated in 2011, only two players have come in with competitive racquetball experience," Rodriguez said, noting that he and former Flames player and current Assistant Coach Shawn Furman, "trained the rest of them starting from scratch to compete in collegiate racquetball tournaments."

Besides his coaching abilities, Rodriguez is gifted at mentoring players and building team cohesion though social activities and road trips to tournaments.

The four-day national championships featured a total of 178 players from 32 colleges and universities competing in six divisions on 12 courts. Flames senior Daniel Siebler and freshman James Edwards played in the last match of the tournament, finishing fourth in the single-elimination Division I doubles bracket.

Senior Sadie Abramowicz, the Mid-Atlantic Conference female player of the year who was the only Lady Flames player making a second trip to nationals, was eliminated with losses to Oregon State's Lexi York and BYU's Krista Yourstone, the No. 1- and No. 2-ranked players in the nation who both play professionally.