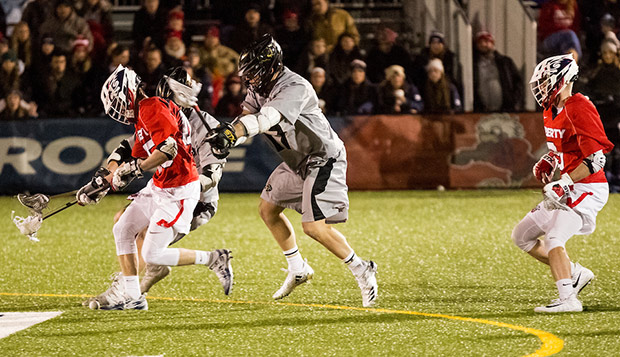 Liberty players battle for a ground ball in last Friday night's contest against Colorado at home. (Photo by Nathan Spencer)

A week after hosting two Top-20 MCLA Division I teams and a week before traveling to Delaware to take on two more over Spring Break, Liberty University's men's lacrosse team visited SELC Division I foe North Carolina State for their first meeting in four years, a lopsided 14-4 victory.

The Flames (4-2), who shot up seven spots to No. 12 in this week's MCLA DI rankings, gained the upper hand on the Wolfpack (1-4) with sophomore midfielders Austin Aguilar (12-for-13) and Jimmy Fowler (6-for-8) winning the majority of the faceoffs and the Flames playing physical defense throughout the contest.

"We had a lot of success in faceoffs and that allowed us to dominate the time of possession," Liberty Head Coach Kyle McQuillan said. "Our goalies also split time today and we were able to use our entire bench. We didn't get a high level of productivity out of everybody, but experience on the field is good, regardless."

A minute and a half into the first quarter, junior defender Win McKeever started a counterattack after receiving an outlet pass from junior goalie Brayden Harriman (3 saves) and rushing downfield uncontested before firing the game's first goal from the right side of the box.

Freshman midfielder Mateo Zumpano (3 goals, 1 assist) finished a point blank shot off an entry pass from sophomore attack Caleb Britton (2G, 3A) for a 2-0 edge before the Wolfpack got on the scoreboard on a shot by senior attack Miller Barbour from the top of the box, cutting the deficit to 2-1.

Britton pushed the lead to 3-1 by posting up in front of two defenders in the left crease and pocketing a turnaround, over-the-shoulder shot into the top left corner before the Flames added two more goals in quick succession to make it a 5-1 contest. Senior attack Chase Wright (2G) put away a running shot with 4:20 to go before sophomore attack Derrick Esh (3G) scored on a drive through the right side with 3:04 left in the quarter. Zumpano capped the first-quarter scoring with a leaping turnaround shot for a 6-1 lead.

Freshman midfielder Billy Zoeller started the second-quarter scoring by taking a pass from Britton behind the net and unleashing a wide-open shot from the top of the box into the upper netting 10:30 before halftime. Then, an own-goal stretched Liberty's advantage to 8-1 with 6:00 to go. Junior attack Sam Gregory (1G, 3A) spotted Esh cutting through the right crease and assisted him from the right endline for a point-blank finish and 9-1 lead. Gregory received a pass behind the cage, darted out on the left endline, and fed Britton cutting toward the left post for an easy score and a 10-1 advantage.

NC State midfielder Devin Johnson capitalized on a man-up situation with a driving shot from the right side, cutting it to 10-2 before halftime.

Senior midfielder Brett Miller (2G) slammed home Gregory's assist from behind the cage to end a scoring draught with 7:34 left in the third quarter before Barbour sliced into the right crease and beat Liberty sophomore goalie Ryan Reynolds (4 saves) with a short-ranged shot to make it 11-3. Gregory drove to the left crease and netted a goal on a fadeaway shot in the final 20 seconds for a 12-3 lead.

After the Flames worked the ball around the perimeter, Britton set up Esh cutting through the right crease for a shot into the top left corner to make it 13-3 with 11:08 left in the fourth quarter.

Johnson netted his second goal, dashing into the middle of the box and finishing into the top left netting to draw NC State within 13-4. Esh answered with a sharp-angled shot from the left side of the box to stretch the lead back to 10. The game was scoreless for the final seven minutes.

"Unforced turnovers and not being focused made this game a bit uninspiring to watch from our sideline," McQuillan said. "The good news is the guys will get a couple days off to regroup … before taking on Connecticut and Michigan State."

Next Friday's and Saturday's games against the 18th-ranked Huskies (4-0) and No. 4-ranked Spartans (8-0) will be played on outdoor turf fields in Frederica, Del., as part of the Battle of the Beach Tournament. (It was originally going to be the Battle of Baltimore Classic in Maryland.) Five Top-20 teams will compete in the eight-team event, including No. 8 Virginia Tech (3-2) and No. 6 South Carolina (8-0).