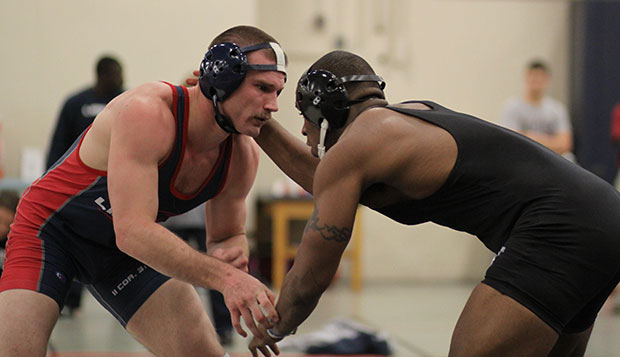 While injuries and illnesses to some of its top wrestlers prevented Liberty University from placing as a team at the Dec. 28-29 Citrus Classic Invitational in Ft. Lauderdale, Fla., they gained some valuable experience over the Christmas break, landing three individuals in the top eight out of 25 or more wrestlers in their respective weight classes.

Aaron Thompson, the 197-pound champion at last year's National Collegiate Wrestling Association Championships, came in sixth at the same division despite battling a case of the flu.

"He was miserable," Liberty coach Jesse Castro said. "For him to do as well as he did with how he was feeling was pretty remarkable. He is an elite wrestler."

Thompson, who didn't compete in his first tournament until the Nov. 17 Lindenwood Open near St. Louis, went 4-2, with his only two losses decided in overtime and double overtime.

"The ones he lost were really close," Castro said.

"Mark has been pretty consistent," Castro said. "Bobby (Clymer) had one bad match early on, but came back in consolations and won four matches in a row."

Castro was missing four of his regular starters, NCWA national runners-up Royal Brettrager (184 pounds, shoulder and knee injuries) and Andrew Wilson (heavyweight), who lives in Anchorage, Alaska, and could not make the trip to Florida; Chase Boontjer (157), who was nursing an ankle injury; and freshman Marcus Miller (149), a Liberty Christian Academy graduate who suffered a concussion in practice the day before the team traveled.

The Flames have high expectations for this weekend's Virginia Duals, held annually at Hampton Coliseum. Liberty placed third after being seeded fourth out of eight teams in the American College Division at last year's Virginia Duals, defeating Apprentice School 30-15 in the consolation final.

Castro said he expects Boontjer, Wilson, and Brettrager to be back for competition.

Unfortunately, 141-pound sophomore Joey Paddock recently underwent surgery on his foot and may not be available until mid-February.

Blessed with a 42-man roster, Castro has the flexibility to rotate wrestlers in at various weight classes and believes the Flames will become a formidable foe once he gets his lineup stacked the way he wants it.