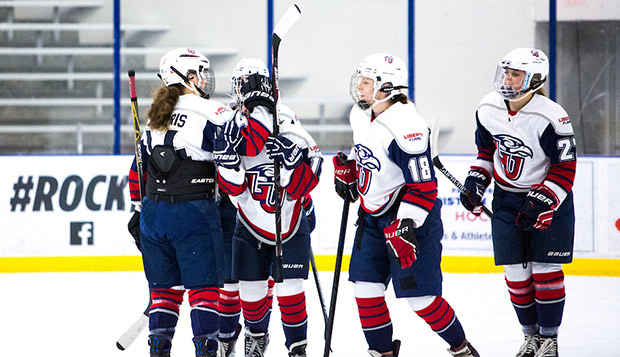 Liberty celebrates a goal against Maryland in a game last month in the LaHaye Ice Center. (Photo by Andrew Snyder)

After being edged in overtime by Boston College, 4-3 in Wednesday's opener, the Lady Flames suffered an 8-3 setback to Minot State (23-4-1) — the No. 1 seed out of the West and eventual pool champion — on Thursday.

In Friday's final game, the Lady Flames (12-6-1) were looking to pay back Buffalo, which had erased a 4-1 third-period deficit for a 5-4 victory in the March 3 College Hockey East (CHE) playoff final. But Liberty's first winning season and postseason run ended with a 5-2 loss to the Bulls (11-4).

Madeline Norton gave Buffalo a 1-0 lead when she sneaked a sharp-angled backhanded shot past Liberty goalie Faith Gerber at the 16:31 mark of the first period.

Four and a half minutes later, Lady Flames senior Kjrstin Hoberg skated the puck from the red line up the left wing before finishing with a backhanded shot past Bulls goalie Theresa Meosky, tying the score at the 12:03 mark.

After killing a penalty to start the second period, an offsides call prevented a Lady Flames fast break and Buffalo capitalized on the other end. Bulls center Alexis Peters faked past a defensman in the left circle before lifting a top-shelf wrist shot past Gerber for a 2-1 advantage with 18:38 left in the stanza.

Buffalo forward Lynn Copeland stretched the edge to 3-1 by converting on a power play goal from point-blank range in front, assisted by defenseman Megan Pofi at the 14:47 mark.

Meosky made a sprawling save of a Lady Flames' scoring threat in a crowd around the cage before the Bulls extended their lead to 4-1 when Norton finished a putback with 18:10 remaining in regulation.

Liberty trimmed the deficit to 4-2 at the 11:03 mark when Sarah LaPorte recovered a loose puck near the endline and skated behind the cage before setting up Kara Rice for a backhanded score in front.

With the Bulls on a power play in the final 6:17, Norton all but put the game away by completing her hat trick with a wrist shot from the right circle for the 5-2 final score.

In the opening loss to Boston College, Liberty overcame a 3-1 deficit at the end of the first period to force overtime on unassisted goals by freshman forward Alexis Early on a first-period power play and Rice and Hoberg in the second. The Eagles outshot the Lady Flames 45-32 and Gerber made 41 saves, but couldn't stop Peyton King's game-winner midway through the five-minute overtime.

Against Minot State, Hoberg scored off an assist from Early, who pulled Liberty back within 5-2 by finishing a feed from senior defenseman Ashley Wright in the final seven seconds of the second period. Freshman forward Brittany Hegele, Liberty's leading scorer on the season with 29 goals and 28 assists, made it a 5-3 contest with an unassisted goal 1:15 into the third period before the Beavers, who outshot the Lady Flames, 47-13, netted the final three scores.