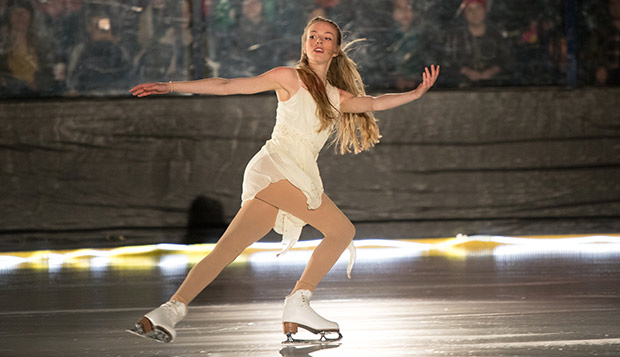 Liberty University's figure skating team travels to Carnegie-Mellon University for its third and final Eastern Sectional competition this Saturday and Sunday in Pittsburgh.

"We're excited, we're coming back strong, we're not giving up," Lady Flames Head Coach Dawn Harter said. "They've got a fire in their belly and they want to go out and do the best they can. They've put in a lot of hours over this season and they want to finish as strongly as they can and that's what I hope they'll be able to do."

Four injuries and two cases of the flu took their toll on the Lady Flames for their second Eastern Sectional competition Feb. 3-4 at MIT, where they placed eighth out of 28 participating teams with 31 points, behind Boston (101 points), Delaware (96), Dartmouth (81.5), Connecticut (52.5), and Sacred Heart (48).

"Coming into MIT with only 20 starts was not enough to compete for a top-five finish," Harter said, noting that took Liberty out of contention for the April 13-15 USA Figure Skating Intercollegiate Nationals in Denver. "Those things are setbacks, but they're also ways that we can encourage one another. … Our team has maintained an upbeat spirit and grown in their strength off the ice physically and spiritually. We are thankful for what the Lord has given us to work with this season and we look forward to the future."

Liberty sophomore LeAnn Fung will make her season debut after missing the previous two competitions due to injury and Harter will enter Preliminary Dance and High Team Maneuver teams for the first time this weekend.