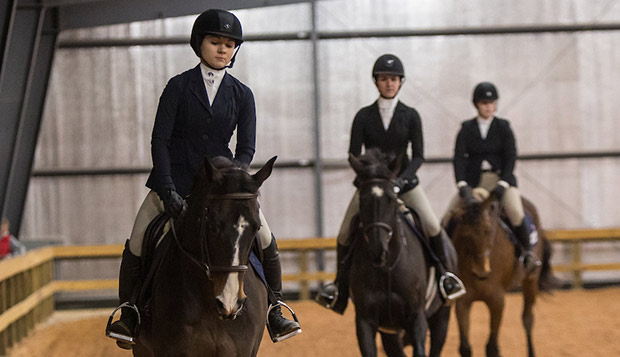 Liberty University's Hunt Seat equestrian team had the opportunity to host two shows last month at the Liberty Equestrian Center, including the Feb. 24-25 Intercollegiate Horse Show Association (IHSA) Region 4 individual championships, when it was represented by 10 team members. Riders qualified for five divisions of the Zone 4 championships, to be hosted by Virginia Tech on April 7 in Blacksburg, Va.

"Since it was CFAW (College For A Weekend), we had a ton of people here watching us, so that put on a little more pressure, but it was fun and we all did really well," Gayheart added.

Riders from both the Hunt Seat and Western teams will be in contention to advance to the May 3-6 IHSA National Championships in Harrisburg, Pa.

"As a Western program, we really have had a successful year, especially individually," Liberty Western Head Coach Lauren Eagles said. "We are peaking at the right time, coming into the postseason with everyone riding their best."