Schartz to sign with ECHL's Norfolk Admirals for playoff run 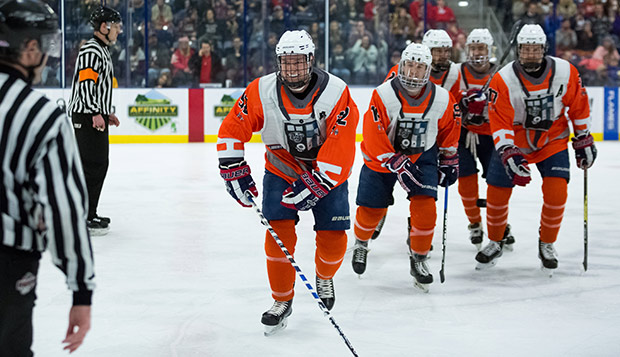 Two days after junior defenseman Zane Schartz and Liberty University's ACHA Division I men's hockey team suffered a season-ending 2-1 overtime loss to defending champion Central Oklahoma in the opening round of the National Championships in Columbus, Ohio, Schartz was practicing with the Norfolk (Va.) Admirals of the East Coast Hockey League (ECHL).

Schartz, a first-team All-Eastern States Collegiate Hockey League (ESCHL) selection who led all ACHA DI defensemen in scoring (29 goals, 36 assists, 59 points) this season, will sign an amateur tryout (ATO) agreement with the Admirals on Thursday morning to join the team for the last 10 games of the regular season and the playoffs, if they make it.

"It is an awesome opportunity and I am super excited about it," said Schartz, who got the tryout opportunity when Norfolk defenseman T.J. Melancon was called up to the Syracuse Crunch, the AHL affiliate of the NHL's Tampa Bay Lightning. "They were looking for an offensive-minded defenseman and that's what I am so it's a perfect fit for me to step in and fill that void."

Schartz plans to continue his pursuit of a degree in Business Marketing through Liberty's online programs and walk with his graduating class in Spring 2019.

"It's always been a dream to play professional hockey at the highest level possible," he said. "I hope to help lead the way for other Liberty players to make the jump to this level."

Two members of Liberty's DI men's coaching staff — Associate Head Coach Jeff Boettger and Assistant Coach Dan Berthiaume — played in the ECHL. Berthiaume, who played for five NHL teams, was inducted into the ECHL Hall of Fame after a long goalkeeping career with the Roanoke Express. He helped Schartz get the tryout in Norfolk, where Peter Sidorkiewicz, who platooned at goalie with Berthiaume on the Ottawa Senators back in 1992-93, serves as an assistant coach.

Schartz, a Plano, Texas, native, will be in uniform when the Admirals, currently in fifth place in the South Division of the ECHL's Eastern Conference, host three games this weekend at the Norfolk Scope.

"It's been an amazing three years at Liberty," said Schartz, who played 99 games for the Flames over three seasons. "It was the best decision of my life going there, and its bittersweet leaving such a great situation and environment and leaving friends there. When an opportunity like this presents itself, I'm going to do all I can to make the most of it and to be a light in the hockey world, and a good witness to my teammates."