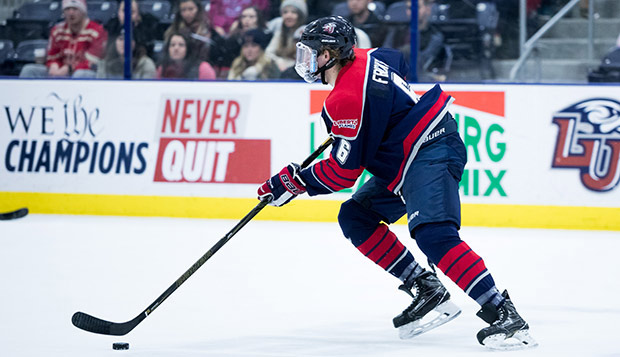 Sophomore Jacob Fricks was one of two Flames selected to the All-ESCHL Defensive Team. (Photo by Nathan Spencer)

After sweeping the regular-season and tournament titles in only its second season in the Eastern States Collegiate Hockey League (ESCHL), Liberty University's ACHA Division I men's hockey team reaped plenty of individual honors for the 2017-18 season as well.

The Flames (30-7) — who were edged in overtime by defending champion Central Oklahoma in Saturday's Round of 16 at the ACHA DI National Championships — were awarded four of the six selections on the All-ESCHL First Team, led by junior goalie and ESCHL Tournament Most Valuable Player Cole Burack.

Senior forward and alternate captain Grant Garvin, the Flames' leading scorer for a third season in a row and the ACHA DI points leader with 25 goals and 49 assists (74 points), made the first team along with junior alternate captain Zane Schartz, the ACHA's top-scoring defenseman and overall leader with 14 power-play goals, and sophomore forward Brock Thompson (23G, including a team-high five game-winners, 26A).

Freshman forward Cole Gammer, who netted the game-tying goal in the final minute of regulation in Saturday's loss to the Bronchos, was selected as ESCHL Rookie of the Year and received Second Team recognition. Gammer was joined by freshman linemate Jordan Bochinski on the ESCHL All-Rookie Team.

Liberty Head Coach Kirk Handy, who eclipsed the 400-win mark in his 18th season at the helm, was selected as ESCHL Coach of the Year.