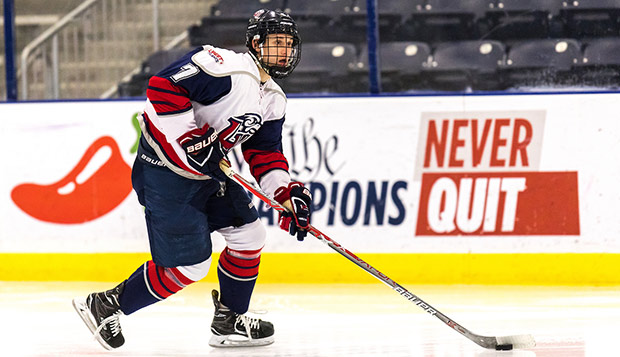 Freshman forward Blake Flanders scored the equalizer in the third period of Friday's opener against Northeastern before the Flames fell, 3-2. (Photo by Joel Isimeme)

Playing their third game in as many days, the Flames (18-11) allowed Denver to score the tying goal in the final 2.9 seconds of regulation and the game-winner 2:44 into the 10-minute sudden-death extra period.

"We outplayed them and had control pretty much the whole game," Liberty first-year Head Coach Ben Hughes said, noting the Flames outshot the Pioneers, 53-48. "We let a lot go around (junior goalie) Blake Scott, who made some great saves, but in the end, we had some defensive breakdowns, leaving guys open backdoor."

Liberty lost its opener against Northeastern, 3-2 on Friday, before being shut out by Aurora , 4-0 on Saturday, officially eliminating the Flames.. Northeastern defeated Aurora, 4-2 in Sunday's final Pool D contest, clinching a Final Four berth.

That didn't keep Liberty from playing with a sense of purpose in Sunday's final game of pool play against the Pioneers, who were also 0-2 in their first two outings. Liberty leaped out to a 2-0 first-period lead, starting with junior forward Eric Masters' close-range finish just 1:21 after the opening faceoff, assisted by sophomore forward Drew Crilly and senior center Matthew Perri.

Perri later skated through the right circle and sent a crossing shot that caromed off of Crilly's skate into the cage for a 2-0 lead before Scott made a series of great saves to keep Denver off the scoreboard.

Early in the second period, freshman forward Blake Flanders extended Liberty's lead to 3-1 on a shot from the right wing before Michael Kaufman made it a one-goal game at the 8:37 mark of the second period.

Less than a minute later, Perri pushed the Flames' edge back to 4-2 by stealing the puck in the right corner and skating into the slot before lifting a backhanded shot past the Pioneers' goalie.

Senior forward Marshal King scored the first of his two shorthanded goals early in the third, roofing the putback of his own backhanded shot from in the right crease for a 5-2 advantage. But Christos Koukis started the comeback with a bar-down shot from the right point on a power play with 17:39 to play. Brian Desmond later cut the deficit to 5-4 with 4:43 remaining by intercepting a clearing attempt right in front of Liberty's goal and lifting a wrist shot into the top corner.

Pioneers forward Tyler Novy netted the first of his two equalizers in the final 4:09 before King scored his second shorthander on a putback in the left crease assisted by sophomore defenseman Jackson Roy.

After Denver (20-13-1) pulled its goalie for the man advantage in the final minute, Novy scored backdoor on a putback with Scott sprawling on his back and Koukis put the Pioneers on top for the first time with the game-winner in overtime. 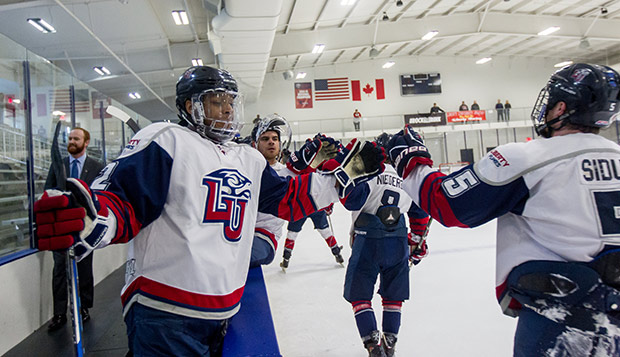