Flames lacrosse fends off No. 10 Sun Devils in home thriller 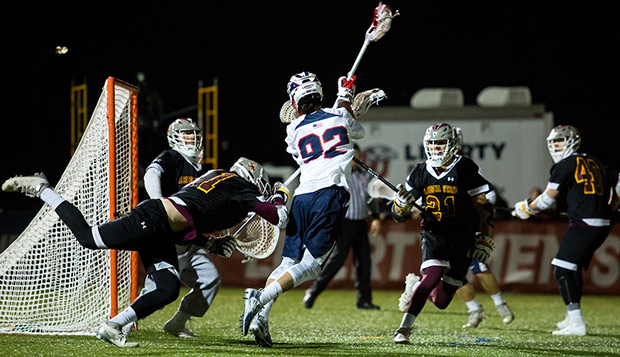 Hosting its second top-10 opponent in as many nights, Liberty University's 19th-ranked MCLA Division I men's lacrosse team opened a 7-6 lead on No. 10 Arizona State before the intermission and eventually emerged with a 12-11 triumph, Saturday night at the Liberty Lacrosse Fields .

It was a much-needed turnaround for the Flames (3-2) after giving up eight third-quarter goals in a 17-15 loss to visiting No. 5 Colorado on Friday in a game knotted at 9-9 at the half.

"Tonight was a good win for this team, and a great response after losing to Colorado," Liberty Head Coach Kyle McQuillan said. "ASU has a very good team, and for our guys to come out tonight and get the win is a big step for this young team. I'm proud of this team and excited about where we are headed."

Junior attack Sam Gregory (2 goals, 2 assists) tied the contest at 2-2 early by putting away junior midfielder Chase Wright's assist from the top of the box with a wraparound goal from the left post.

Gregory lifted Liberty to a 3-2 advantage with a point-blank, top-shelf finish of a driving assist from sophomore attack Derrick Esh (3G, 2A) across the box at the 7:42 mark of the first quarter. Gregory then made a spectacular spin move between defenders in the left side of the box and fed sophomore midfielder Carter Elliott (2G, 2A) for a sharp-angled shot ripped into the side netting, extending the lead to 4-2.

ASU (3-5), which dropped from No. 6 to No. 10 in last week's poll and was coming off an 11-10 loss Thursday at No. 8 Virginia Tech, pulled within 4-3 when midfielder Emerson Roth dodged a Liberty defender and fired a left-handed shot into the top right corner.

But Caleb Britton (3G, 1A) got that goal back by making a move behind the right post on the other end and finishing a wraparound shot from the left side into the top right netting, stretching Liberty's lead to 5-3 with 2:26 left in the first quarter.

Midway through the second, Roth penetrated into the box and assisted senior attack Patrick Haviland with a turnaround finish to trim the Flames' lead to 6-4 before Flames sophomore Austin Aguilar answered by circling behind the cage and ripping a sidearmed wraparound shot into the upper netting while falling down on the right side.

The Sun Devils, who outshot the Flames, 36-29, netted the last two goals of the first half and tied it at 7-7 in the first minute of the second before Elliott sent a fast-break feed to Britton left of the post, where he faked high and finished low for an 8-7 advantage at the 12:46 mark of the third quarter.

ASU tied it back up with 7:23 left in the third on a catch and release by senior midfielder Ryan Bradway. Then, Bradway set up attack Jake Marthens for a low finish from the left side, lifting the Sun Devils to a 9-8 lead.

With a man advantage, Elliott netted the equalizer by taking a pass at the top of the box and unleashing a sidearmed shot across the body of ASU goalie Paul Koestler inside the right post with 4:58 left in the third.

Elliott, who injured his shoulder while taking a hit near midfield early in the second half, picked up an entry pass from Wright on a bounce in the left crease and slammed the finish past Koestler to make it a 10-8 contest in the fourth quarter.

Flames goalie Ryan Reynolds (13 saves) blocked a point-blank shot moments later, and after a steal by sophomore defender Grayson Rhyne (6 ground balls), Esh executed a great dodge on the other end before putting away a crossing shot inside the right side of the net with 9:13 left.

Haviland made it a one-goal game by completing his hat trick with 4:30 to play before Britton set up Esh in the top of the right side of the box for a 12-10 cushion with 2:55 to go. ASU cut it to 12-11 when junior midfielder Ben Perietti ripped a shot from the right side of the box off an assist from behind the net with 57.9 seconds remaining. But on the ensuing possession, Flames junior defender Ean White intercepted an entry pass into the box and sent an outlet pass to Gregory who stayed in bounds up the left sideline, all but clinching the electrifying one-goal win. 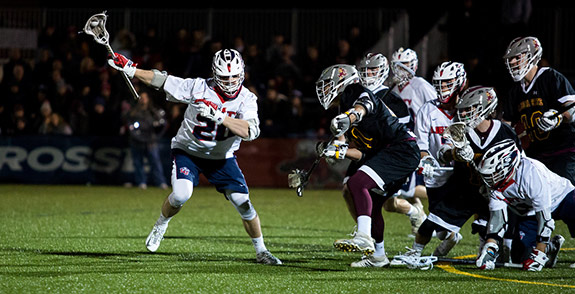 Men's Lacrosse at University of Connecticut