Snowboarders finish third in Slopestyle to land on podium 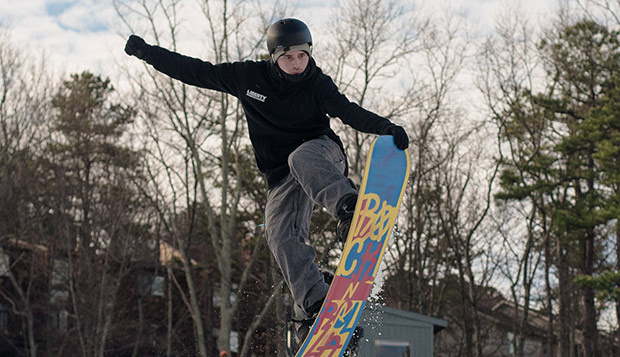 Overnight snowfall made Thursday's Slopestyle event more challenging for Liberty's skiers and none qualified for finals. On Friday, two Flames snowboarders made the Slopestyle finals cut and junior Garrett Long finished fifth individually to lead the Flames to a third-place team showing.

"That was certainly the highlight of our week," Liberty first-year Head Coach Isaac Gibson said. "Over the last few years, Garrett has shown himself to be consistent in our Slopestyle competitions and this year followed suit."

In Wednesday's Rail Jams, Liberty sent two skiers and two snowboarders to finals after advancing with top-six finishes out of three heats.

Among skiers, sophomores Jeff Loftus and John Hunt both reached the 16-man finals to lead Liberty to a third-place podium finish with 32 points, behind only Sierra-Nevada (6) and Colorado-Boulder (25).

Hunt under-rotated a back flip and landed hard on his hip and wasn't able to finish the contest due to injury, but he still put down Liberty's highest-scoring run (29 points), placing him ninth. He was followed closely by Loftus in 11th with a 24-point run, sophomore Christopher Yablonski (tied for 12th, 18 points), and senior Andrew Garofalo (25th).

Freshman Owen Hewitt finished 10th out of 18 contestants in the snowboard finals with 26 points to pace the Flames to a fourth-place team finish with 50 points, behind Sierra-Nevada (9), Westminster (13), and North Carolina State (45). Long placed 18th with 13 points followed by freshmen Payton Fedako (22nd) and Trent Laubach (28th).

"For their first races of the season, I was pretty impressed to see some of our riders be able to advance to the bracket rounds," Gibson said, noting that his riders raced with the same snowboards and skis they use for Slopestyle events, putting them at a disadvantage.

Loftus was the only Liberty skier to qualify out of the 60-skier time trials to the 32-man bracket and finished 24th to lead the Flames to a ninth-place showing out of 26 teams.

"Overall, it was a really good experience for the young guys to see how high the level of competition is at nationals," Gibson said. "Those who did not make finals were left hungry, wanting to progress their skiing and snowboarding over the next year to return stronger for the 2019 USCSA National Championships."