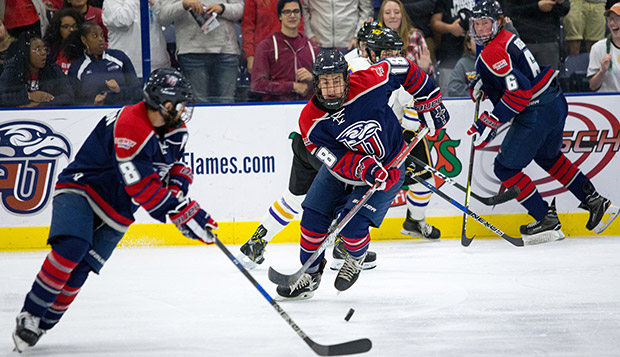 Liberty University's ACHA Division I men's hockey team, on a program-record 19-game winning streak exceeded only by No. 1-seeded Minot State's 21-game tear, is on a quest for its first crown at the 2018 ACHA DI National Championships in Columbus, Ohio.

"We're rolling right now and if we can string together four more games, we're going to be national champions," said freshman forward Cole Gammer (15 goals, 31 assists), who has moved onto the Flames' top line with senior ACHA DI scoring leader Grant Garvin (25G, 49A) and sophomore Quinn Ryan (14G, 35A). "It's a really tight-knit group right now going into nationals. We've been dreaming about this moment since the start of the season."

In order to accomplish its goal, 10th-seeded Liberty (30-6) must first upset No. 7-seeded, defending national champion Central Oklahoma (29-5-3), in Saturday's 5 p.m. showdown at the Ice Haus.

"We're real happy with our lineup going into nationals," said Liberty Head Coach Kirk Handy, who eclipsed the 400-win mark late in his 18th season at the helm. "We've got good balance of our veterans and young guys. … The guys believe in one another and want to compete and battle for each other."

Central Oklahoma's offense is sparked by All-WCHL second-team forwards Donald Danroth (16G, 32A) and Brandon Formosa (25G, 21A), who leads the Bronchs with 10 power-play goals and five game-winners. All-WCHL first-team defenseman Spencer Peratalo ranks second on the team with four game-winning goals and third with 22 assists.

Both teams' defenses are anchored by exceptional goalies. Central Oklahoma, which has won two of the past three national titles, returns WCHL first-team selection Alex Henry, who made 44 saves in a 3-0 win over Ohio in last year's final. This season, Henry (17-5-3, 1.68 goals-against average, 94.2 save percentage) has posted eight shutouts, tied with Adrian's Austyn Roudebush for most in ACHA DI. Henry is backed by Jacob Wallstedt (12-0, 2.31 GAA, 90.1 SP).

Flames junior Cole Burack, a transfer from NCAA Division III SUNY-Brockport, has had the hot hand of late, earning ESCHL Tournament MVP honors after allowing three goals in two games to raise his record to 20-4 and save percentage to 93.1 while lowering his goals-against average to 1.83 with five shutouts. He is backed up by junior Josh Halpenny (10-2, 2.47 GAA, 89.6 SP, 1SO).

"Special teams have been a big part of our success and if we're going to carry that into the tournament, our special teams will have to be a big piece of the puzzle for us," Handy said.

Bronchos 15th-year Head Coach Craig McAlister has compiled a 330-168-31 record since starting Central Oklahoma's program in 2003, also guiding it to the 2015 national title.

The complete tournament bracket is available online. All 19 games, including Saturday's opener, will be webcast live by the ACHA via YouTube.