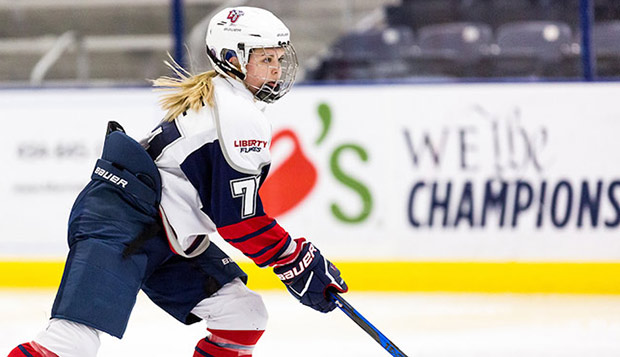 Liberty ACHA Division I women's hockey defenseman Sydney Pierce and her teammates have allowed only 22 goals this season and take a 25-3 record and No. 1 ranking into nationals. (Photo by Joel Isimeme)

The 2018 ACHA National Championships, which open Thursday and run through March 18 at various rinks around Columbus, Ohio, will be a monumental tournament for the Liberty University men's and women's hockey programs.

After becoming the first school in the country to offer teams at all five levels of the ACHA — Division I, II, and III men and Division I and II women — Liberty will send a record four of its five squads to nationals.

Liberty DI men's Head Coach Kirk Handy, who also serves as Club Sports Athletic Director, said the tournament will be a unifying time for the four squads, especially with the entire event being played in the same city for the second year in a row.

"We're all going to one place, and the teams will get to watch each other's games, which is really exciting," he said, noting that all five national tournaments will be held in Dallas for the next two years.

All of this year's games will be webcast live on YouTube by the ACHA.

The Division I Lady Flames (25-3), which became the first Liberty team to claim a national championship in 2015, has made the ACHA DI Final Four in the past five national tournaments. Ranked first in the nation for all but one poll this season, the team will open with a best-of-three quarterfinal rematch against No. 8 Minnesota on March 14. The team also enjoyed a record 19-game run of success this season.

Liberty's DII women (12-3-1) qualified for the College Hockey East (CHE) playoffs and ACHA DII nationals for the first time this year and will open against Boston College on March 14 before facing Minot State and CHE champion Buffalo in pool play on March 15 and 16.

After earning autobids to nationals the past two seasons, Liberty's DII men's team won both of its games at the Southeast Region tournament to advance to nationals for a fifth year in a row. The Flames must win their pool this Friday through Sunday to reach Monday's Final Four.

Additionally, the equestrian Western and Hunt Seat teams have an opportunity to send more than one rider to the IHSA Nationals for the first time from May 3-6 in Harrisburg, Pa. Liberty's men's lacrosse team can qualify for its first trip to MCLA DI National Championships from May 7-12 by winning the April 20-22 SELC Tournament in Atlanta.

Members of the Flames archery team have already returned to Lynchburg with national bowhunting team and individual titles, respectively, at the Collegiate 3D Nationals in the fall and the USA Archery Collegiate Indoor Nationals Feb. 9-11 in Las Vegas before the Lady Flames placed ninth in their first time competing at the U.S. Synchronized Skating Championships Feb. 24 in Portland, Ore.