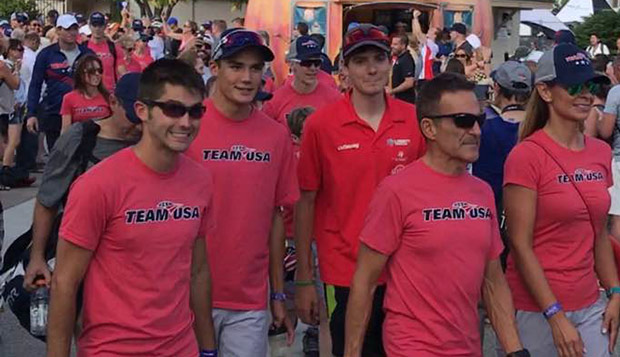 Liberty University triathlon, cycling, and men's swimming & diving Head Coach Parker Spencer will join USA Triathlon Head Coach Bobby McGee and Triathlon Canada national coach Jonothan Hall on the other side of the world for the most exciting coaching opportunity of his career starting this week.

Spencer will serve as an assistant coach for USA Triathlon's men's and women's national teams at this Sunday's ITU World Triathlon Grand Final sprint races in Mooloolaba, Queensland, on the Gold Coast of Australia and the March 25 ITU Triathlon World Cup in New Plymouth, New Zealand.

"Those are two of the biggest races in the world," said Spencer, who flew out of Washington, D.C., at 3 p.m. today for a five-hour flight to Los Angeles, where he will take a 15-hour connecting flight to Brisbane, Australia.

Spencer spent 10 days in July learning from McGee and other mentors in an Elite Coach Development Program at the U.S. Olympic Training Center in Colorado Springs, Colo., and a week in January with Hall training Olympic hopefuls from the United States, Canada, Mexico, and Spain at a camp in Scottsdale, Ariz.

McGee is a high-performance coach from South Africa who has sent over 40 athletes to the Olympics, and Hall, originally from Australia, used to work for USA Triathlon before joining the Canadian Triathlon Federation as its high performance director.

"The three of us have a great relationship and we're excited to work together again," Spencer said. "It's going to help our teams at Liberty. If I'm on the (USA Triathlon) national team coaching staff, that's going to help me recruit more Olympic hopefuls."

During his two weeks Down Under where he will help coach some of the top triathletes in the world, Spencer will rely on his wife, Kristina, and his assistant coaches to keep the five endurance sports teams running. New triathlon Assistant Coach Beni Thompson, a former professional triathlete from Chile, will lead the Flames' and Lady Flames' workouts as they train for their first races of the spring, April 14 at Belews Lake, N.C.

Cycling assistant coaches Van Phillips and Scotty Curlee will help direct the first-ever ACCC road race hosted by Liberty out of the Hydaway Outdoor Recreation Center on March 17 before Phillips travels with the teams to races hosted by Virginia Tech on March 18 and the Naval Academy on March 24-25.