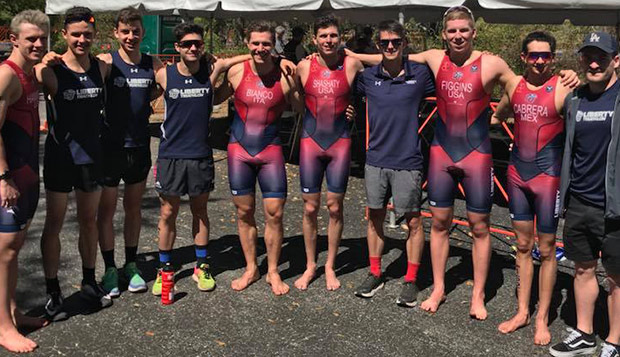 Giovanni Bianco, a Flames freshman from Italy, placed fourth in Saturday's first Elite Developmental race in 59:12.8 before rounding out a 5-9-10 Liberty finish in Saturday's second event in 54:04.4. Freshman Bobby Hammond from New Jersey, who had placed 20th in Saturday's first race in 1:00.44, moved all the way up to fifth place on Sunday with a time of 53:45.7, and fellow American Freddie Shashaty, a junior from Richmond, Va., placed ninth on Sunday in 54:02.7, a 10-position improvement from Saturday's 19th-place showing in 1:00.42.

In Sunday's pro race, Javier Lluch Perez of Spain placed ninth out of 39 participants in 55 minutes, 49.2 seconds — just over a minute and a half behind the overall winner (Eli Hemming of the United States, 54:18.9). Liberty sophomore Thomas Sonnery-Cottet from France came in 18th in 56:57.1, a week after finishing ninth in an Olympic-distance CAMTRI race in Cuba. He was followed by Liberty teammate Joan Colino Calomarde from Spain (37th in 1:04:30.7).

"We had a really good showing all the way around," Spencer said. "In the pro race, you had some of the best triathletes that represent their specific countries, including multiple guys from Canada and the United States. Our guys were three of the youngest in the field. It was a really good race to see what the competition looks like and to get the ITU (International Triathlon Union) points they needed and see where they need to improve this season."

Spencer said the experience will give the Flames' men an advantage when they compete at the April 27-28 USA Triathlon Collegiate National Championships in Tuscaloosa, Ala.

"Collegiate Nationals is really good competition, but Clermont was one of the most competitive draft-legal races in the country, so to have three guys in the top 10 (in Sunday's Elite Developmental race) is a super strong showing and it really sets them up well to go into nationals and challenge for the team title," Spencer said.