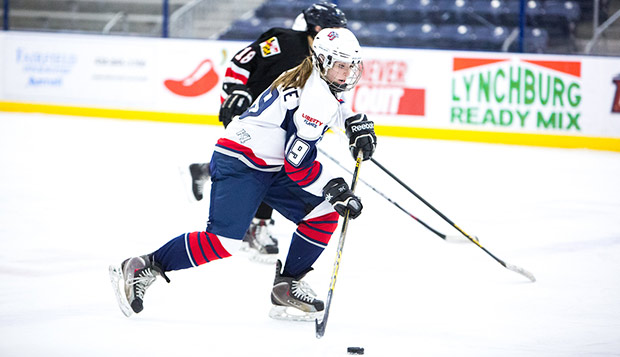 After dropping two of its first three games, splitting home series with Delaware and the Naval Academy, Liberty went on an 11-game winning streak before ending the regular season with a 5-5 tie on Delaware's Olympic-sized ice on Feb. 11. The Lady Flames have not lost on the road this year.

"The past two seasons have been a huge turnaround for our team, and with the recruits we have coming in, we're going to keep progressing until we win a national title," Liberty Head Coach Sara Niemi said, noting that the team will graduate five seniors from this season's squad but already has eight recruits committed for 2018-19. "We have high expectations to win playoffs this weekend and try to make it to the finals at nationals. We've already met our season's goals, so we're going to go out and take it game by game."

The Lady Flames are seeded second in the CHE's East Division and will face Buffalo (10-2), the No. 1 seed out of the West Division, in Saturday's CHE Tournament, starting at 5:15 p.m. at Indiana University of Pennsylvania's Carmel Ice Arena.

While the Bulls have outscored opponents by a 110-24 margin this season, Liberty holds a 137-35 advantage on its foes.

Regardless of how the Lady Flames fare this weekend, their first three matchups at nationals have been determined after they clinched the No. 3 seed out of six qualifiers from the ACHA East Region. They will play three games at The Chiller Easton, starting with a crossover match against Boston College (10-1-1) on March 14 at 2:15 p.m., before playing the other two teams in Pool B, Minot State (21-4-1) on March 15 at 1:15 p.m. and Buffalo at 2:15 p.m. on March 16. The top team out of each of the four three-team pools advance to the March 17 Final Four, also played at The Chiller Easton, with the winners advancing to the March 18 championship game set for 2:15 p.m. in the Ice Haus.