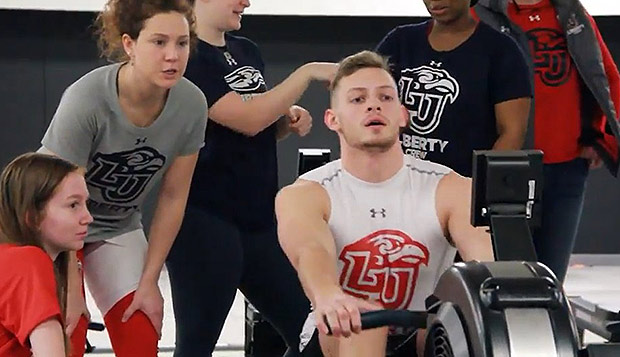 Flames rower Spencer Barrett practices on one of the ergs set up in Liberty's indoor training facility.

Last Saturday, 15 Liberty University men's and women's crew rowers traveled to Williamsburg, Va., for their only indoor competition of the winter season, the Colonial Erg Sprints held on 10 rowing machines in the College of William & Mary's Student Rec Center.

The Flames and Lady Flames competed as individuals against more than 250 rowers from the host Tribe as well as American, Christopher Newport, Mary Washington, Virginia Commonwealth, and Virginia Tech in 2,000-meter men's and women's novice, lightweight, and varsity races.

In the open men's varsity competition, Liberty sophomore Ryan Krupansky placed fifth in a field of 18 with a personal-record time of 6 minutes, 51.2 seconds. Allie Coughlan overcame a hip flexor strain to clock the Lady Flames' fastest time of the day in the women's open varsity race with a PR time of 8:05.9 that placed her 12th out of 25 rowers while fellow senior Lydia Miller finished fifth out of 10 college varsity lightweight women rowers in 8:25.2.

All of Liberty's novice men set PRs, led by Flames freshman Mike Pryor, who came in sixth out of 26 competitors with a PR time of 6:55.2.

"Rowers get adrenaline at the race, from people yelling and screaming at you and those racing next to them, so they've got to be smart about it and not go out too hard," Liberty Head Coach Debbie Prowse said, noting that each had a coxswain providing reminders of technique and motivation to push beyond their limits to get through the race. "They've got to set a goal and keep their focus. A 2,000-meter erg test feels really light in the first 500 meters, but it gets really hard the third 500, so they've got to settle into their goal split times and try to maintain that and not hit that wall."

Liberty's rowers tested the water at Smith Mountain Lake this week with its first early-morning workouts of the new year out of the team's boathouse near Mitchell's Point Marina.

The Flames and Lady Flames have a month of practice to prepare for their first of three spring regular-season regattas, the March 31 Clemson Sprints. Liberty will then compete in two regional events, the April 7 Waterfield Memorial Cup, hosted by Virginia Tech on Claytor Lake and the April 14 Rocketts Landing Regatta, hosted by VCU in Richmond, before concluding the year at the Southern Intercollegiate Rowing Association (SIRA) Championships, April 21-22 in Oak Ridge, Tenn., and the American Collegiate Rowing Association (ACRA) Championships, May 26-27 in Gainesville, Ga.

This Tuesday (March 6), crew team members will take their ergs from their practice facility in the former Macy's building at River Ridge Mall to Liberty Christian Academy's physical education classes to introduce high school students to the sport and spark their interest in potentially joining them at Liberty.

The team will also recruit current Liberty students through hour-long indoor "Learn to Row" events Thursday nights in April, with those who complete the four sessions having an opportunity to row in an actual crew skull on Smith Mountain Lake in May.