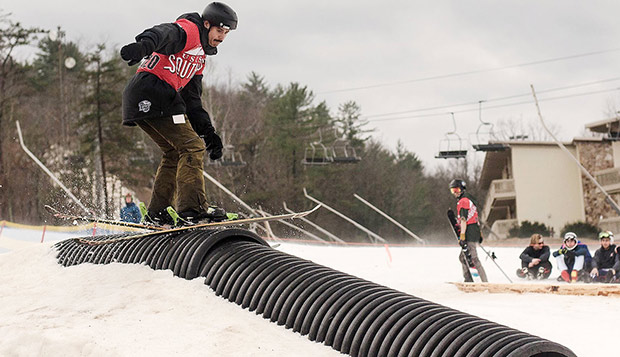 Conditions were less than favorable due to the warmer weather that has drastically reduced the amount of snow at area resorts, forcing the event to be moved from Wintergreen to Bryce Resort.

"There was still very little snow, so the riders didn't have a lot to work with and the features were very small in comparison to what we have at Liberty Mountain Snowflex Centre and what we will see at (USCSA) Nationals," Flames Head Coach Isaac Gibson said of the March 4-10 event at Lake Placid, N.Y., site of the 1980 Winter Olympics.

The Flames entered five athletes in both Rail Jams at regionals and all 10 qualified for the finals after the fields of 45 snowboarders and 28 skiers were cut in half based on scores in the preliminary heat.

Liberty won the men's skiing team competition by a landslide with all five of its skiers advancing to the finals and finishing in the top 12.

Lafayette's Andrew Graves was the highest-scoring individual with a 28-point run, but didn't have any teammates in the finals. Liberty sophomore Jeff Loftus placed sixth with a best run of 22.6 followed by freshman Cole Loomis (eighth, 20.6) and sophomores Chris Yablonski (ninth, 20) and John Hunt (10th, 19.6), despite competing with an elbow injury. Senior Andrew Garofalo finished 12th with a run of 18.

Penn State, which had the second- and fifth-place skiers, Eric Replogue (25) and Matt Blumenthal (23), took second in the team scoring.

Gibson plans to enter all five of his qualifying skiers and all five snowboarders in the Skiercross and Boardercross competitions on Tuesday, the Ski and Snowboard Rail Jams on Wednesday, and the Ski Slopestyle and Snowboard Slopestyle events on Thursday and Friday, respectively.

The Flames will arrive Saturday and have two full days of practice on Whiteface Mountain, site of the 1980 Winter Olympics' ski events. The top five scores from each school will factor into the team standings, so Gibson is counting on every competitor to land a scoring run on each of the three events.

"We may struggle to take individual podiums," he said. "Where we should have the most success is competing for team podium finishes. If all the guys are putting down clean, landed runs across the board, that will help us lock up the podium spots."

He expects some of Liberty's best competition to come from out West, from schools in Utah, Nevada, Oregon, and California, which usually show up in big numbers.