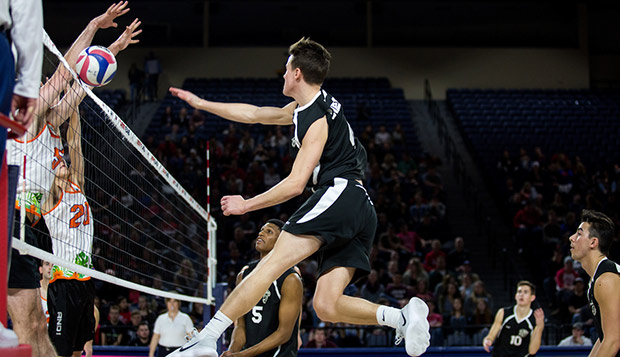 Sophomore outside hittter Sam Hess goes up for a spike into a Florida block in the Jan. 26 'Midnight Mayhem' match in the Vines Center. (Photo by Nathan Spencer)

In-state rivals have proven to be nemeses for Liberty University's NCVF Division I men's volleyball team this season. After going 4-0 to win its pool on Saturday and qualify for the first time for the Gold bracket of this weekend's Hoosier-Illini Classic at Indiana University and winning Sunday's first match over 13th-ranked DePaul, 25-17, 25-19, the 11th-ranked Flames were upset and eliminated by No. 17 Virginia Tech in the semifinals, 25-20, 25-18.

"We had beaten them four times in a row, but today was their day," Liberty Head Coach Bryan Rigg said. "They came ready to play today. They were aggressive and got the ball to fall their way."

In similar fashion, the Flames had gone undefeated in pool play, including beating the Hokies, to reach the semifinal round of the Feb. 10 ECVA South Division play date at JMU before being knocked out by Virginia. Both Liberty and the Cavaliers earned bids to East Coast Championships at that event.

In Sunday's rematch with Virginia Tech, fatigue set in and the Flames faltered from the back row.

"We didn't have our best game. We struggled in our serve-receive and did some things that were uncharacteristic," Rigg said, noting that the Hokies feature four front-row players 6-feet, 5-inches or taller. "Their team is made up of giants and when you're playing a big team with big blockers and your passing is off, you become a one-dimensional team when they put the block up and the whole complexion of the game changes."

Typically smaller in stature than their opponents, the Flames usually find other ways to win.

"We have other things we do well," Rigg said. "We've defined ourselves as a good serving team and a good passing/serve-receive team and if our serves aren't going in or our serve-receive is off — if the two things that make us good aren't working — we're not a very good team."

Liberty started the day against DePaul the same way it had in Saturday's pool play, when it won three of its four matches in straight games.

"We were in control of the match against DePaul the whole time," Rigg said. "There was no fighting from behind. We had the lead from start to finish and there were no momentum shifts. It was clear from the get-go that we were the better team. They really couldn't do much to stop us. Everybody played their role well and we got a lot of kills and blocks. Our back-row defense was great, we were very scrappy, and very few balls hit the floor."

"It was a good weekend for everybody," Rigg said.

While Marquette defeated Virginia Tech in the championship match, Liberty finished 5-2, with its only other loss coming after its backup players filled in against No. 3 Illinois for Saturday night's crossover match. Complete results are avaiable online.

"This was probably the most successful tournament we have ever had against nationally ranked competition," Rigg said. "It ranks as one of our biggest accomplishments."

He expects the Flames (8-5) to move up in the second NCVF rankings, to be released on Wednesday. They return to Southern Virginia for a second showdown with the NCAA Division II Knights on March 6 before hosting the ECVA South Division tournament on March 24 in the LaHaye Multipurpose Center.