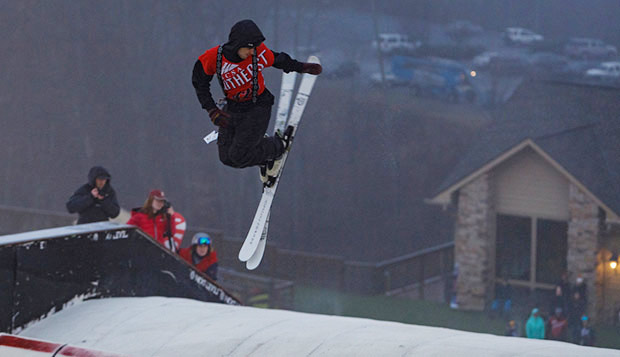 This weekend's United States Collegiate Ski & Snowboard Association (USCSA) Mid-Atlantic Regionals has been moved from Wintergreen Resort, Liberty University's ski and snowboard team's training base away from the Liberty Mountain Snowflex Centre, to Bryce Resort, which has more snow left on its slopes.

The two-day qualifier for the March 4-10 USCSA National Championships at Lake Placid, N.Y., site of the 1980 Winter Olympics, will include racing on Saturday and Slopestyle and Rail Jam competitions on Sunday.

Liberty Head Coach Isaac Gibson plans to send 10 men's travel team members — five skiers and five snowboarders — to Sunday's regional competition, and expects all 10 to qualify for nationals, where the Flames can enter Skiercross and Boardercross races as well as Rail Jam and Slopestyle events.

Last weekend at Snowflex, Liberty's men's skiers and snowboarders defended their Southeast Conference regular-season championships by sweeping their final competitions in Big Air on Saturday and Rail Jam on Sunday, which attracted more than 40 riders and skiers from around the region.

Among skiers, Flames sophomore John Hunt completed a one-and-a-half-rotation spin with a grab and a smooth landing to take first-place honors with a score of 3.63, despite competing with a brace on his elbow after injuring it in practice.

"John Hunt has an injured arm and was still able to put down a 540 that looked very solid," Gibson said. "That was very impressive."

Two Flames sophomores — snowboarder Lee Patton and skier Jeffrey Loftus — were injured in Saturday's warmups and a third, snowboarder Tyler Wilson, is out for the postseason with an ACL tear in his knee after overshooting a slopestyle jump on a practice run the previous weekend at Big Boulder (Pa.) Park.

Following Sunday's regional competition, Liberty's national qualifiers will drive up to Lake Placid next Saturday to get three full days of practice on Whiteface Mountain in preparation for their first USCSA Nationals event, the Rail Jam on Wednesday, March 7. 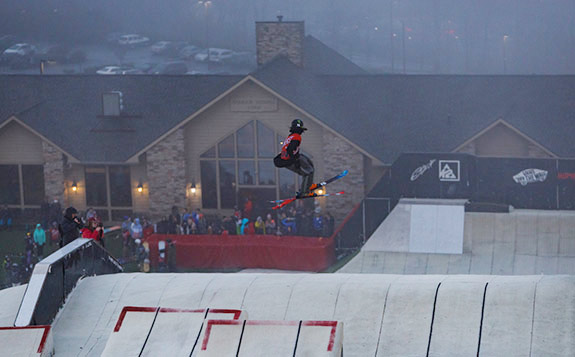