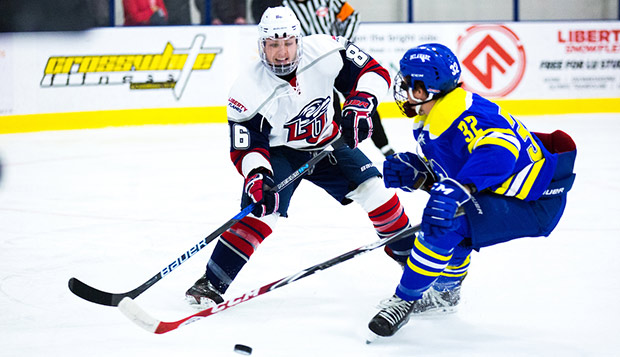 The top-seeded Flames (28-6, ranked 10th in this week's ACHA DI poll), who dethroned four-time defending champion Stony Brook in the championship game of last year's tournament, will open defense of their ESCHL Tournament title at the Ice Line Quad Rinks in West Chester, Pa., on Saturday at 4:45 p.m.

They will face second-seeded Delaware (20-16-2, ranked 25th in ACHA DI), a 7-2 first-round winner over Rutgers, in the South Division final. Liberty won all four meetings with the Blue Hens this season, clinching the ESCHL regular-season title with its first win in Newark, Del., on Jan. 26. Saturday's game will be webcast live by Delaware on YouTube.

"It's a really exciting time of the year," Flames Head Coach Kirk Handy said. "This is a unique group of guys who love to go to work hard and compete every day and we're looking forward to really being at our best this weekend. We're ready to go."

With a win on Saturday, the Flames would face the semifinal winner out of the ESCHL's North Division, either a rematch with the top-seeded Seawolves (21-7-4, ranked 15th) or a showdown with second-seeded Rhode Island (23-11-2, ranked 23rd) or third-seeded New York University (15-9-2, ranked 24th) in Sunday's 1 p.m. championship game.

Liberty junior goalie Josh Halpenny said the conference tournament serves as an excellent tune-up for nationals, as they try to build on their program-record 17-game winning streak.

"We've got a great team this year and we should be great for the playoffs," he said. "We've been there before and the ESCHL playoffs are a great way to get a feel for nationals and what the competition is going to be like with the high intensity."

Senior forward Grant Garvin, who finished the regular season as the Flames' leading scorer for the third year in a row and currently is tops in ACHA Division I with 73 points (25 goals, 48 assists), said Liberty is playing even better now than when it went into last season's national championships on a 10-game winning streak.

"We are peaking at the right time and we are looking forward to the conference playoffs, but even more so nationals," Garvin said. "That's our focus, playing one game at a time and doing the little things right every day. Everyone's willing to put in the hard work that needs to be done, coming into the rink and practicing hard."