Flames dominate Seawolves in near shutout 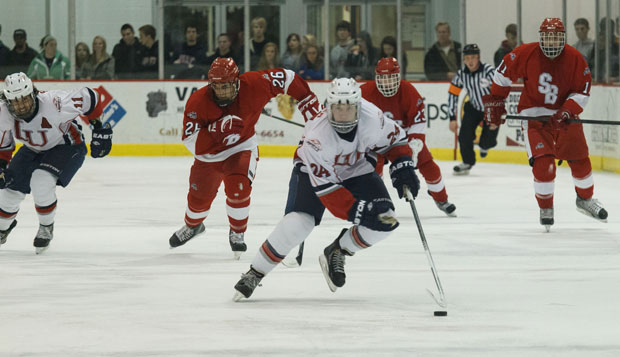 Rick Turner (#24) led the charge for the Flames against Stony Brook, scoring twice in the second period in Liberty's 3-1 win.

Liberty continued its Friday night scoring run — when the Flames put in six unanswered goals after falling 1-0 — and goalie Blair Bennett nearly posted a shutout. Bennett, displaying unbelievable maneuvering around the net, held the hungry Seawolves at bay for 59.55 minutes — and then Andrew Belzafiore found the back of the net on a power play, a bittersweet ending to an otherwise solid performance.

Riding its momentum from the night before, Liberty was all over the ice — and Stony Brook — early on. Andrew McCombe led a charge for the Flames which opened up an unassisted Paul Ingles goal just one-and-a-half minutes into the game. Liberty continued to skate all over the Seawolves, showing unmatched energy on the ice as the Flames outshot Stony Brook 16-10 in the opening period.

Flames points leader Rick Turner led the way for the home team in the second period. On a Liberty penalty kill, Turner stormed out of the box, receiving a Paul Ingles pass, and fired at the net, setting himself up for a rebound goal six minutes into the second. Then, with time winding down in the period, Turner broke loose and beat Seawolves netminder Brendan Jones stick side to give Liberty a 3-0 lead and extend its scoring streak in the series to nine goals.

Stony Brook outshot Liberty 15-8 in the third period, but Bennett and the Flames D staved off the attack and looked prime for a shutout. But Belzafiore managed to send one through as the final seconds began to tick away, spoiling it for the home crowd.

The win puts Liberty at 14-9-1 heading into the New Year and gives the Flames a 3-1 advantage in the season series with Stony Brook. The No. 10 Flames will begin 2013 with a much-anticipated road trip out West to face Arizona and the American Collegiate Hockey Association's No. 1 team, Arizona State. Liberty will face the top-ranked Sun Devils first on Jan. 10 at 10 p.m. (EST) followed by two games with the Wildcats in Tuscon, Ariz., Jan 11-12.