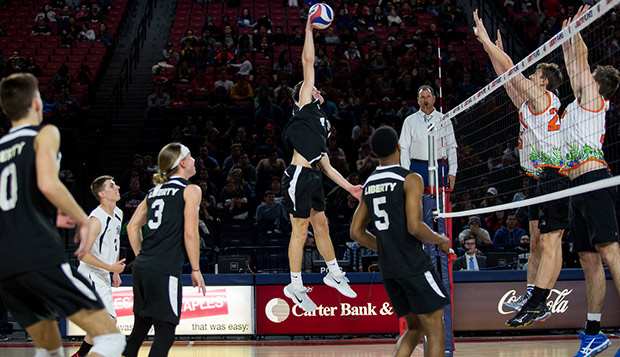 After committing 10 unforced errors and making just three kills in the first game, the Flames turned that around in the final three games with 12 kills and four errors in the second game, 14 kills and one error in the third, and 11 kills and six errors in the fourth.

Junior outside hitter Brady Quakenbush stepped up his game to spark the Flames' attack, leading the way with a team-high 14 kills to go with six digs and two blocks. He complemented senior middle hitter Gene Dejesus (9 kills, 5 digs, 4 blocks), who paced Liberty with a .300 kill percentage.

Paul Clark led SVU (9-4) with 10 kills and four aces while setters Braden Liu and Kaipo Tagaloa each distributed 20 assists out of the Knights' 6-2 offensive rotation.

The Flames (4-3) will send their DI and DII teams to Indiana University in Bloomington, Ind., this weekend to compete among 24 of the top NCVF DI and 24 of the best DII teams in the nation at the 17th annual Hoosier-Illini Classic. They will return to Buena Vista for a rematch with Southern Virginia on March 7 before hosting the East Coast Volleyball Association (ECVA) South Division championship tournament on March 24 at the LaHaye Multipurpose Center.

Liberty has already qualified for the March 31 East Coast Championships at the University of Maryland, its final tune-up for the April 12-14 NCVF National Championships in St. Louis.