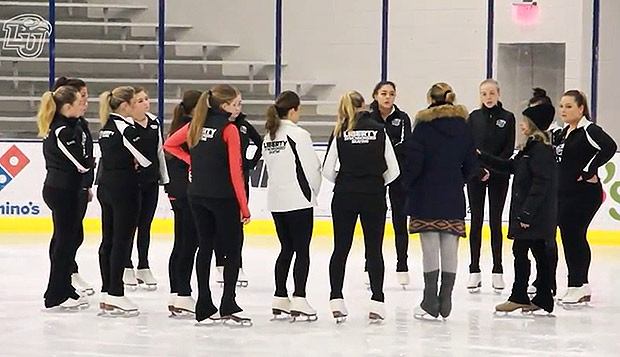 While the Winter Games are wrapping up this weekend in South Korea, Liberty University's synchronized skating team has caught the Olympic spirit as the Lady Flames prepare to compete in their first U.S. Synchronized Skating Championships, Saturday in Portland, Ore.

"The team is really, really motivated right now," Payne said after the Lady Flames qualified fourth out of the Eastern Section behind Delaware, UMass-Amherst, and Boston University. "They don't have the same amount of pressure on their shoulders as they've had. They've got nothing to lose right now. Their goal is to skate the best that they can and skate a performance they are proud of. That's where everybody's focus is right now."

Liberty will skate in its first unofficial practice session at 9 p.m. in nearby Vancouver, Wash., before spending Friday in downtown Portland. The Lady Flames' official practice is set for Saturday at 8:30 a.m. before they perform their four-minute routine — revamped from its last Eastern Sectional competition in Florida — at around 3 p.m. as the fourth of 10 Collegiate Division programs represented at nationals.

Officials will determine the Lady Flames' score soon after they leave the ice, applying International Judging System (IJS) rules. Payne is confident they will be impressed with the revisions her skaters have implemented.

"We actually changed half of our program because we want to get the university name out there and get national recognition, and to show the judges that we have improved from sectionals and are willing to make bold moves and the changes necessary to have a program that scores well," Payne said.

Most of the top competitors will be from Midwestern schools, including defending national champion Michigan, which ended Miami (Ohio) University's 13-year championship run, as well as Michigan State, Adrian, and Western Michigan.