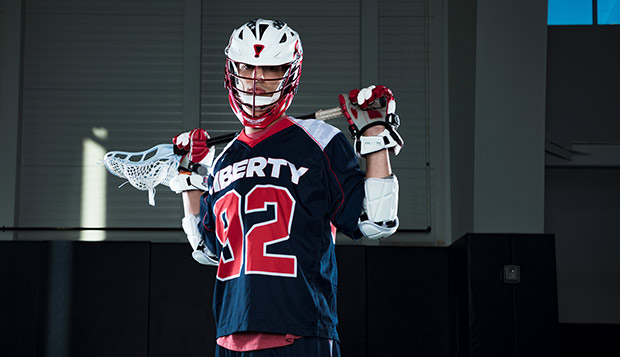 Sophomore attack Caleb Britton is coming off a phenomenal rookie season when he scored 50 goals and distributed 21 assists. (Photo by Leah Seavers)

As it prepares for Friday's 7 p.m. MCLA Division I season opener at SELC Northwest Region rival Tennessee, Liberty University's men's lacrosse team learned it had moved up one spot to No. 17 in this week's MCLA Division I rankings.

After facing the Volunteers, the Flames will travel to South Carolina for a showdown with the 15th-ranked Gamecocks on Sunday at 1 p.m. That will be their first of six regular-season games against teams currently ranked in the MCLA Top 25, followed by No. 7 Colorado (March 9), No. 5 Arizona State (March 10), No. 18 Connecticut (March 23), No. 10 Michigan State (March 24), and No. 9 Virginia Tech (April 13) are the others. USC (6-0) shot up 22 places to No. 15 after upsetting Florida State, which dropped to No. 21 after being ranked 11th in the Preseason Poll.

"It's hard to have perspective in the fall and early in the spring, but now that it's game week, we've got  to be fully focused on Friday," Liberty Head Coach Kyle McQuillan said. "We're telling the guys we have two very important games this weekend. Our focus is not just on South Carolina. We can't overlook Tennessee, a Northwest Regional opponent that would like nothing better than to knock us down and take us out of (SELC) playoff consideration."

"We're looking forward to getting onto the field to start proving ourselves and we need to make sure that we're ready to match their experience levels," McQuillan said. "We have had a lot of really talented players come through our program who have had more individual success, but the way this team plays and the depth that we have, this is the best team that we've had to date."

The Flames, who feature a 33-man roster, will be without freshman long-stick midfielder Andrew Lazina due to injury and a few others facing academic eligibility issues.

"For the most part, we have access to the full complement of our roster, so that shouldn't keep us from putting our best foot forward," McQuillan said. "We've got the core of our group returning from last year, though we're still a very young team. Similar to last year, we have a very, very strong freshmen group, but we won't need to rely on freshmen as much as last year, which will hopefully give them time to adapt and develop and grow."

Junior attack Sam Gregory (36 goals, 27 assists in 2017) sparks the Flames attack along with sophomore midfielder Carter Elliot (25G, 14A) and attack Caleb Britton (50G, 21A) and junior defenders Win McKeever and Ean White, who have been designated the team's four captains.

"These guys are ready to take the next step and take some leadership roles and have a lot of success on the field," said McQuillan, who plans to platoon junior Brayden Harriman and sophomore Ryan Reynolds between the pipes, with Harriman likely starting Friday's opener against the Volunteers and Reynolds Sunday's game against the Gamecocks.

"We have two goalies who have gone back and forth and been very competitive throughout the fall and spring, pushing each other to be the best they can be," said McQuillan.