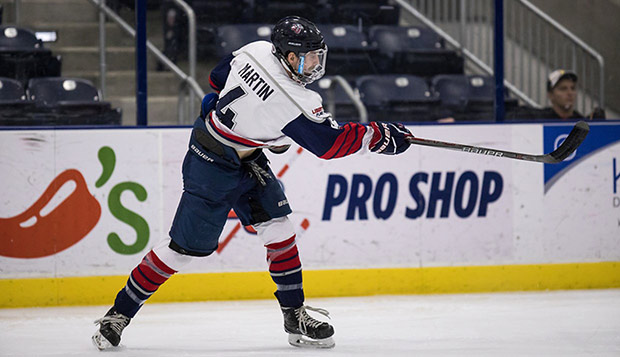 Flames freshman defenseman Kyle Martin launches a shot in a Feb. 2 game against Ohio at the LaHaye Ice Center. (Photo by Joel Isimeme)

The Flames (15-7-1), the third-place team in the Southeast Region rankings behind Penn State and Florida Gulf Coast, need to win both of their games, set for noon on Saturday and Sunday, to advance to their fifth consecutive ACHA DII National Championships, March 9-13 in Columbus, Ohio.

Liberty first-year Head Coach Ben Hughes believes the Flames will build off the confidence of taking Penn State (24-2-1) to overtime before falling in Sunday's MACH final, 3-2.

"Penn State is No. 1 not only in our region, but the entire country and we've taken them to overtime two out of three times this year," Hughes said.

(The Ice Lions got an empty-net goal to win the Oct. 20 opener at Liberty, 6-4, before completing a sweep, 4-3 in overtime the next day.)

In Sunday's final, senior center Marshal King gave the Flames a 1-0 lead off an assist from sophomore forward Drew Crilly before Penn State seized a 2-1 lead by the end of the period. Freshman forward Blake Flanders netted the equalizer in the second before junior goalie Blake Scott made an incredible save late in the third to preserve the 2-2 and force overtime.

"The guy had the whole net open and Blake was able to get across the net and make a big save for us with 1:38 left in the third period," Hughes said of Scott, who finished with 62 saves and was named the tournament MVP.

Penn State scored with 10:07 left in the 20-minute overtime period to clinch the title. The Ice Lions nearly doubled-up Liberty as they outshot the Flames 65-33.

Flames senior Paul Lamoureux, a first-team all-MACH selection at forward, was named to the All-Tournament team after converting a hat trick in the Flames' 6-0 South Division final victory over Maryland, with Scott recording the shutout.

"The guys showed up big-time that day and played a full 60-minute game," Hughes said.

For this weekend's tournament, Liberty receives a bye through Friday's first round games and will play the lowest-seeded team to advance from matchups between No. 9 Maryland vs. No. 12 New Jersey and No. 10 Rider vs. No. 11 Ohio.

"We've already played three of those teams and split with all three," Hughes said of Maryland, Ohio, and Rider.

Cincinnati will face Delaware at 6 p.m. Saturday before Miami (Ohio) takes on Rowan at 9 p.m. If Liberty advances, it would face the lowest-seeded team left on Sunday at noon for a shot to return to nationals for the fifth season in a row. 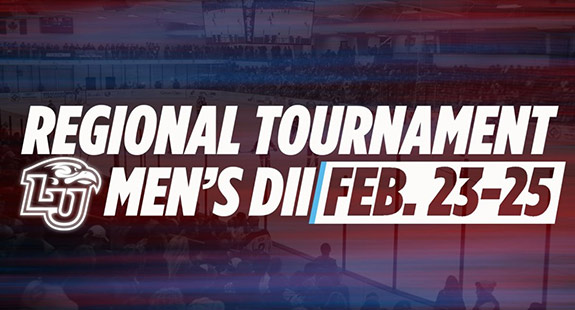