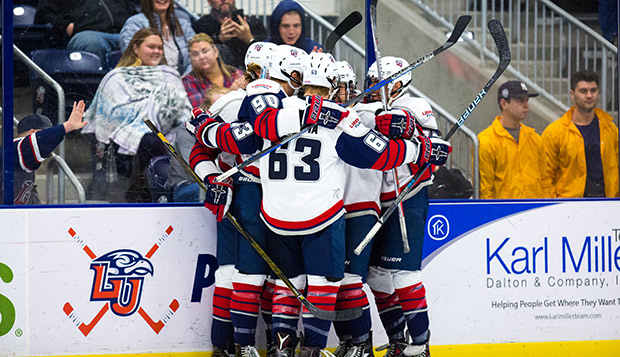 Peaking for the ESCHL and ACHA playoffs, Liberty University's ACHA Division I men's hockey team established a new program record with its 17th consecutive victory in Friday night's regular-season finale at the LaHaye Ice Center, a 10-1 triumph over West Virginia.

The 10th-ranked Flames (28-6), who outscored opponents by a 200-73 margin on the season, improved to 14-0 over the past six years against the Mountaineers (14-16-1), sweeping the weekend's series by eight goals or more in both contests to strengthen their power rating for the final regular-season poll due out on Wednesday.

Liberty honored forwards Grant Garvin and Tim Bierema and converted defenseman Colt Steele before the start of Senior Night and the trio contributed stellar play on both ends of the ice. Both forwards scored twice and Garvin added two assists to bring his ACHA-leading point total to 73 points (25 goals, 48 assists) and his career total to 181 (77G, 104A).

The Flames scored three goals in the first period and three more in the first five minutes of the second to open a commanding 6-0 lead for the second consecutive night. They finished with six power-play goals in eight opportunities, capitalizing on their first five, and two shorthanded scores.

"That might be the most power-play goals I've ever seen scored in a game," Liberty Head Coach Kirk Handy said. "Power play and penalty kill are going to be big going into the playoffs."

Devin Pierce netted the game's first goal 1:07 after the opening faceoff, receiving a pass from freshman linemate Cole Gammer and scored on a sharp-angled wrist shot from deep in the right circle for a 1-0 Liberty lead.

Steele was cross-checked behind his own cage, setting up the Flames' first power play, and Pierce sent a short pass to Garvin cutting through the left crease for an open-net finish and 2-0 advantage.

After going two-for-three with a man advantage in Friday's opener, the Flames started Saturday night two-for-two, extending their lead to 3-0 when freshman Jordan Bochinski sent a cross-crease feed to Bierema in the right crease for an easy power-play putaway inside the right post.

Bochinski added a third power-play goal early in the second period with a shot from the top of the left circle assisted by Gammer with 17:24 remaining. Less than two minutes later, Garvin moved ahead of Assistant Coach Jonathan Chung into fifth place on the Flames' all-time scoring list by cleaning up the putback of a shot from the point by junior forward Zechariah Roberts.

Moments after sophomore forward Quinn Ryan blocked a shorthanded shot by WVU with junior goalie Josh Halpenny caught out of the net, Bochinski converted the Flames' fifth power-play goal, threading the puck past WVU goalie Benjamin Zienty after taking a pass from Pierce along the left boards and skating on net.

West Virginia‘s Cullen Gookin ended the shutout bid for Halpenny by cleaning up a rebound left out front, capitalizing on a five-on-three man advantage with 11:08 left in the period.

Liberty answered less than four minutes later when junior defenseman Zane Schartz, who entered the weekend series tied for third among ACHA scoring leaders, received assists from Garvin and Ryan on the left wing and lifted a wrist shot into the upper netting to stretch its lead to 7-1.

With 1:03 left in a WVU power play and 38 seconds left in the second period, Bierema netted his second goal of the night shorthanded after stealing the puck along the left boards, skating in and lifting a backhander inside the right post.

Forty seconds into the third period, freshman forward Sam Carlson stole the puck in the Mountaineers' defensive zone and skated in for the Flames' second shorthanded score on a shot from deep in the right circle.

Ryan corralled assists from Garvin and Schartz, skating around defensemen and cutting back in front before pocketing the putback of his own blocked shot off the pads of Zienty and in from behind the end line for Liberty's final power-play goal, capping the scoring with 9:22 to go.

Halpenny finished with 15 saves as Liberty outshot West Virginia 39-16 on the night.

The ESCHL regular-season-champion Flames will open defense of their ESCHL Tournament title in West Chester, Pa., on Saturday after receiving a bye through Friday's first round.