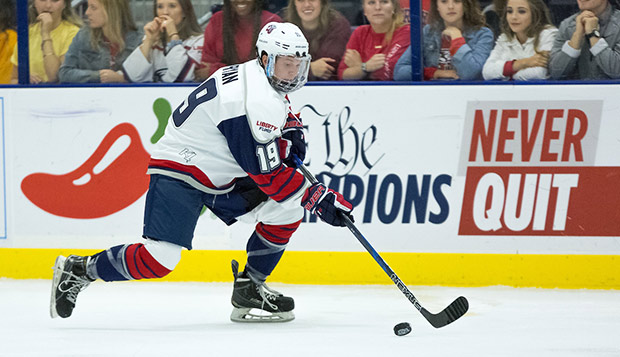 Sophomore forward Quinn Ryan scored one goal and distributed three assists in the Flames' 9-1 win over the Mountaineers. (Photo by Nathan Spencer)

Liberty University's 10th-ranked ACHA Division I men's hockey team overcame a physical start in Friday night's opener against West Virginia by elevating its game over the final two periods of a 9-1 triumph at the LaHaye Ice Center.

The Flames (27-6) outshot WVU by a 58-11 margin to raise their record against the Mountaineers to 13-0 and extend their winning streak to 16 games, matching the team's longest run of success at the DI level after opening the 2009-10 season with 16 straight wins.

When Liberty sophomore forward Victor Blomberg went down with an injury early in the first period, senior alternate captain Tim Bierema stepped onto the line with freshman Ryan Cox and sophomore head captain Josh Hamilton and recorded his first hat trick at the DI level, scoring three of the Flames' four goals in the third.

"We know at this point in the year, it's too critical to drop in rankings, so we kind of rallied together in between the first and second, got our heads on straight, and came out firing," Bierema said.

Fans who came out to support Gleaning For The World's annual Teddy Bear Brigade had to wait more than 13 minutes for the Flames to light up the scoreboard, the signal to shower them with hundreds of stuffed animals thrown from the stands. Hamilton triggered the celebration by picking up the puck from Cox deep in the left circle, cutting back through the left crease, and wrapping his shot around WVU goalie Benjamin Zienty into the right side of the net for a 1-0 Liberty lead.

"That was big for us right there," Liberty Head Coach Kirk Handy said. "That line played well with four of the nine goals."

The Flames netted their second score just 17 seconds into the second period when sophomore forward Quinn Ryan finished feeds from junior forward Zechariah Roberts and freshman forward Devin Pierce, capitalizing on the first of two power-play goals on only three man advantages on the night.

Five and a half minutes later, Pierce recovered a rebound of a Mountaineers shot off the back glass and skated up the left wing before sending a crossing pass to senior forward Grant Garvin in front. His shot was rejected by Zienty, but Pierce swooped in for the point-blank putback, stretching Liberty's lead to 3-0 at the 14:08 mark.

The Flames added two goals in the final 6:20 of the period to open a commanding 5-0 advantage. On the first, Ryan stayed onside as he picked up the puck while crossing the blue line before feeding Cox in the high slot. Zienty blocked the shot but couldn't clear it and freshman forward Jordan Bochinski slid behind the goalie and backhanded the loose puck into the open net.

Roberts scored in nearly identical fashion four minutes later, sneaking behind Zienty and putting away sophomore defenseman Matt Cruickshank's shot from the top of the left circle set up by Ryan with 2:17 left in the second stanza.

With 14:28 remaining in the game, Cox assisted Bierema's first score, which he threaded between the skates of Zienty from deep in the left crease to pad Liberty's lead to 6-0.

The Mountaineers ended Liberty junior goalie Cole Burack's shutout bid with 12:47 to play when Brian Dickman converted a putback in the slot. But Liberty responded by tacking on three goals in the final five minutes.

With 4:58 left in regulation, Roberts converted another assist from Ryan, who sent him a cross-crease feed that he was able to sneak past Zienty while withstanding a check in front.

With 4:21 to go, Bierema deflected junior defenseman Kyle Crane's rocket from the top of the left circle with his arm into the upper netting.

Finally, with 1:52 to go, Bierema capped the scoring and completed his late-game hat trick by receiving Hamilton's pass from the right wing and tucking away a shot from the right crease while falling down.

The lopsided win should give the Flames a boost in next week's final rankings, which determine the seedings for the March 8-13 ACHA DI National Championships in Columbus, Ohio.

Liberty already clinched its 10th bid to nationals in its 12 seasons at the DI level by winning the ESCHL regular-season title. The Flames will defend their ESCHL Tournament championship next Friday through Sunday at West Chester, Pa.

Saturday's rematch with the Mountaineers (14-16-1), set for 7 p.m. back at the LaHaye Ice Center, will be Senior Night for Flames forwards Bierema, Garvin, and Colt Steele. The regular-season finale will be webcast live by the Liberty Flames Sports Network (LFSN) on the Big South Network and WatchESPN.