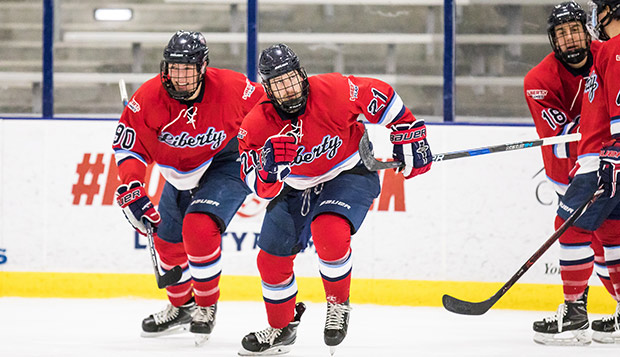 Freshmen forwards Cole Gammer (left), Devin Pierce, and Jordan Bochinski have formed one of the Flames' most effective lines in recent games. (Photo by Joel Isimeme)

Liberty University's ACHA Division I men's hockey team cracked the Top 10 in this week's ACHA DI national rankings, which will determine seedings for the March 8-13 National Championships in Columbus, Ohio.

The Flames, who clinched their 10th nationals berth in 12 seasons at the ACHA DI level by winning their first ESCHL regular-season title, host West Virginia in this weekend's final regular-season series at the LaHaye Ice Center, seeking to solidify their Top 10 standing.

With a seventh straight series sweep of the Mountaineers, Liberty would stretch its winning streak to 17 games, eclipsing the 16 wins in a row it accumulated to start the 2009-10 season. That would give the Flames an extra boost of momentum to take into their defense of their ESCHL Tournament title, next Friday through Sunday.

For Friday night's opener, fans receive free admission if they bring new or gently used stuffed animals for Gleaning For The World's annual Teddy Bear Brigade, to be tossed onto the rink after the Flames score their first goal against the Mountaineers.

Liberty Scouting Report: The Flames feature the top three and five of the top eight scorers in the ESCHL, led by Garvin (23 goals, 46 assists, 69 points); junior defenseman and alternate captain Zane Schartz (21G, 34A), who has netted an ACHA DI-best 13 power-play goals and is tied for third in points; and sophomore forward Brock Thompson (23G, 26A).

Sophomore forward Quinn Ryan (12G, 27A) returned from injury to net one goal and three assists in last weekend's sweep of Alabama. The second line of Cole Gammer (13G, 26A), Jordan Bochinski (11G, 13A), and 2018 transfer Devin Pierce (6G, 4A) has sparked the Flames' attack in recent games, along with fellow freshmen forwards Ryan Cox (7G, 7A) and Sam Carlson (6G, 4A) and sophomore defenseman Garrett Nelson (5G, 6A).

Coaches: Kirk Handy is in his 18th season as the Flames' head coach, guiding them to an overall record of 401-172-25. AJ Sturges, a defenseman at Michigan State through 2012, is in his third season at the helm of the Mountaineers and is 25-38-3.