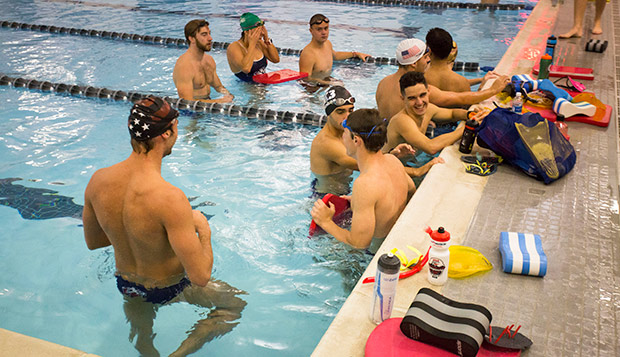 Men's swimmers, including Thomas Sonnery-Cottet (right), take a break at the LaHaye Aquatics Center pool, which they practiced in last semester before moving into the new Liberty Natatorium last month. (Photo by Jessie Rogers)

With the addition of three high-level swimmers and six divers for the start of the spring semester, Liberty University's men's swimming & diving team, already deep and talented for a first-year program, is now a legitimate USA Master's Swimming Collegiate Nationals Championship contender.

Noah Miller, a butterfly specialist, transferred from Olivet (Ill.) University. Ben Klipp, a sophomore at Liberty and solid all-around swimmer, didn't swim for the Flames in the fall. Andrew Slater, a medical student who competed on Ohio State's NCAA Division I team last year, recently joined the team as its fastest sprinter.

The Flames have their sights set on the April 5-7 national meet to be hosted by Georgia Tech in Atlanta even as they prepare for Saturday's spring season-opening Collegiate Club Swimming Association (CCSA) meet at James Madison University.

"Everyone is going to have to perform at their best to win a national championship as a team," Liberty Head Coach Parker Spencer said. "Our goal is to have an individual national champion in several events. Our six divers have worked really well with (NCAA Division I women's diving coach) Tori Wood, which has added a whole lot of strength to our program. The divers we have will help score a lot of points for us at nationals."

Fernandez is the younger brother of Charles Fernandez, who represented Guatemala in the pentathlon at the Summer Olympics in Brazil in 2016. Charles Fernandez is a member of the Flames' triathlon team, and is also training with Liberty's shooting and equestrian teams for another bid to the 2020 Summer Games in Tokyo.

"We won't be able to dive at JMU, but we will have it at our home meet (in early March at the new Liberty Natatorium) and they have already qualified for nationals," Spencer said. "There were only 10 divers last year, so we will grow diving by 50 percent at nationals."