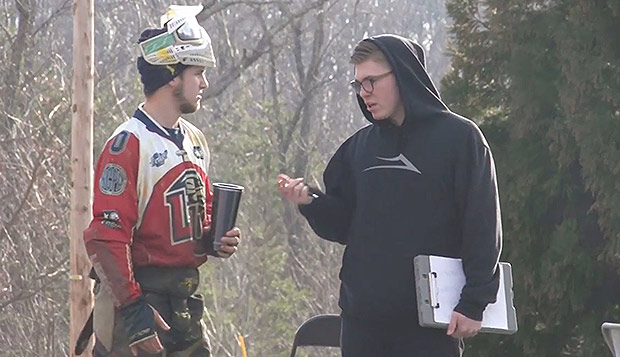 After going 4-0 to win its only Class A tournament of the Fall semester, in Rock Hill, S.C., Liberty University's paintball team will open Spring semester competition with a Class AA tournament near Atlanta on Saturday.

"I'm excited for the new guys that have never played a tournament before," Flames Head Coach Brian Davidson said. "We've got a bunch of pretty solid freshmen coming in and they're doing well. This is where they learn and where they are going to get better and hopefully it carries on up until (NCPA) National Championships," set for April 20-22 in Kissimmee, Fla.

Before then, Liberty will travel to Louisville, Ky., on March 25 and host a final tune-up event for nationals in mid-April.

"I think I have one of the best teams I've had in a long time, though I lost some seniors last year," Davidson said, noting the Flames lost to the eventual champion in the semifinals of last year's NCPA semifinals for the fifth time in team history.

Sophomores Kyle Babb, Austin Larson, and Josh Montanari are three of the Class A linemates who will be counted on to carry the Flames through nationals this season.

In the offseason, Davidson hired a graduate from that team, co-captain Micah McLeod, to serve as an assistant coach alongside another former Flames captain, Aaron Thompson.