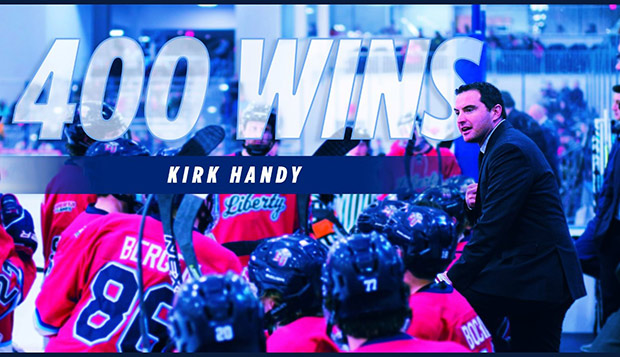 As Liberty University's ACHA Division I men's hockey team extended its winning streak to 15 games with 7-2 and 11-2 victories over Alabama, Head Coach Kirk Handy eclipsed the 400-win mark of his 18-year career at the helm of the program.

"I am so thankful and humbled for opportunity that God has blessed me with to coach and work at Liberty University," Handy said after raising his career record to 401-172-25 (a .700 winning percentage) while the Flames improved to 26-6 on the year with the decisive sweep of the No. 22 Crimson Tide.

"It isn't about me," he said while drying off from being showered by more than half a dozen of his players during Friday's post-game, on-ice video interview. "I'm just a part of this whole program and I've been blessed to work with lots of great people. President (Jerry) Falwell and (Senior Vice President for Auxiliary Services) Lee Beaumont and (the late Liberty founder) Jerry (Falwell) Sr. were always very gracious to me and my family over the years and very supportive of our programs."

Liberty was the first school to have a team represented in all five divisions of the ACHA — DI, II, and III men and DI and II women — and Handy, who was the Flames' leading scorer as a right wing on the men's DII team from 1995-99, is proud of the entire program.

"Obviously, there's a lot of hard work by a lot of different people other than myself," said Handy, who has coached 17 ACHA All-Americans, nine All-ACHA Rookie Team selections, and more than 40 Academic All-Americans over the past 17 seasons. "I've coached with some of my best friends, guys who have really impacted my life. There's a lot of really good people who have been a part of it, including some great players over the years."

Besides coaching, Handy also serves Liberty as vice president and athletic director for its Club Sports department, which includes 41 men's and women's programs in 22 sports. He and his wife, Jannie, have four sons under the age of 10 — Parker, Preston, Pryce, and Porter.

Handy guided the Flames to the DII national championship game in 2006, the year the LaHaye Ice Center opened on campus. Liberty fell to Oakland (Mich.) in overtime in the final, capping its last season at that level before moving up to DI in 2006-07, when Handy was a finalist for ACHA DI National Coach of the Year honors. The following season, the Flames reached the DI Final Four for the first time, landing at the No. 4 spot in the final national rankings after upsetting Penn State in the quarterfinals, ending its streak of championship game appearances at 10.

This year, Liberty's second season in the ESCHL, the Flames earned an autobid to the March 13-18 ACHA DI National Championships in Columbus, Ohio, by clinching the regular-season title, Jan. 26 at defending champion Delaware. The Flames will defend their ESCHL Tournament title on Feb. 23-25 at West Chester (Pa.) after dethroning four-time defending champion Stony Brook in last year's final.

Handy has high hopes that Liberty, currently ranked 12th, can move into the top 10 in the final ACHA DI rankings for the seventh time when the national tournament is complete.

"We've got one more home series this weekend (against West Virginia) and we're looking to keep moving this thing forward here," he said. "It's a great group of guys, a motivated group of guys, and it's been an exciting year for us. We've really seen our guys grow and mature. We're going to continue to refine, to push our guys to be at the place that we want to be once nationals roll around."