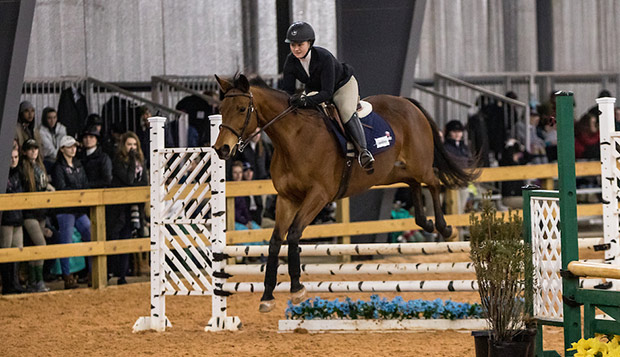 "With the added responsibilities of hosting the show, I couldn't be more pleased because it's a big job to do all of this and compete," Liberty Head Coach Suzanne Flaig said. "We feel very blessed to have what we have here. There were a lot of spectators and we tried to show our hospitality and keep everybody out of the rain and I think they enjoyed their stay."

"It was close until the end," Flaig said, noting that a few of Liberty's riders were out with illnesses, giving others opportunities. "We have eight different divisions that we compete in so you don't really know what the team outcome is until the very end. Fortunately, we have enough depth to stay competitive through all the levels."

Junior Ryan Wambolt, the Flames' only men's competitor who scored seven points in the Walk-Trot-Canter, and sophomore April Simmonds, who earned four points in the Open Over-Fences division and two points in the Open Flat class, were Liberty's highest-scoring individual riders in Saturday's show.

The Liberty Equestrian Center will also host the individual Region 4 Championships on Feb. 24-25.

The Lady Flames can clinch first place in the regular season and the lone team bid to the Zone 4 competition at this Saturday's and Sunday's final Region 4 show hosted by Mary Washington in Fredericksburg, Va. The top two teams in the zonal competition will qualify for the May 3-6 IHSA National Championships in Harrisonburg, Pa.

"The zone is stronger than our region, because it goes all the way down to North Carolina and we have Randolph College and Bridgewater and Hollins, lots of storied equestrian programs with a lot of rich history," Flaig said. 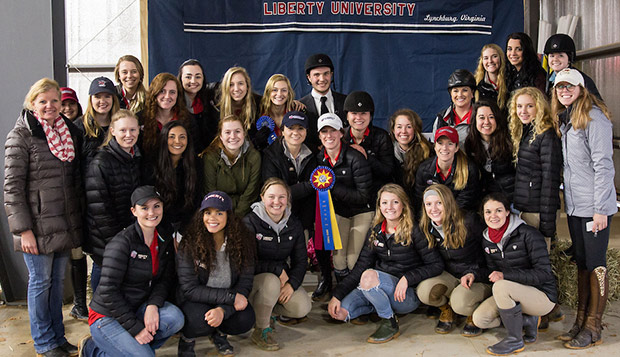