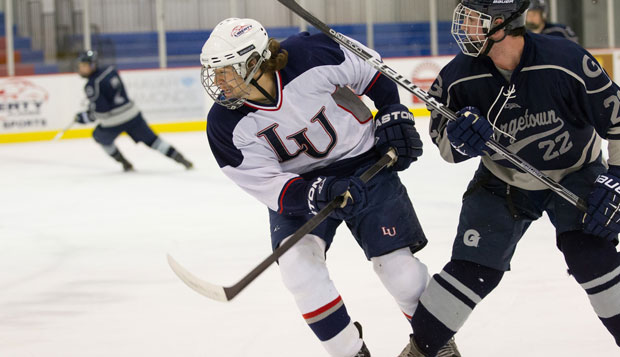 Liberty struck first and laid it on heavy from there, beginning with a goal by Clinton Nigh barely one minute into the game off the John Cotton assist. Brad Docksteader scored the next two Flames goals, first at 11:32 in the opening period off a Drew Muir assist and again five minutes into the second from a Peter Kazmierczak feed.

At 9:21 in the second the Hoyas found the back of the net, but Caleb Allision restored Liberty's three-goal margin with 2:37 remaining.

The Flames put two more points on the board early in the third to lock down the lead and eventual victory. Richie Johnstone scored 30 seconds into the final frame and just over a minute later Kyle Davis made good on a feed from Bobby Cervone. Another minute later Georgetown scored but the Flames held on and claimed the win.