No. 12 Flames sweep No. 22 Alabama in dominant rematch 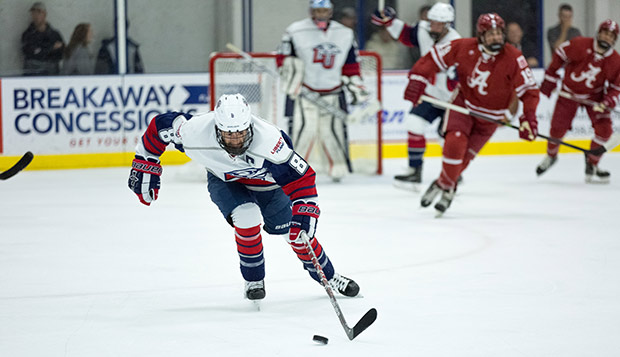 Liberty University's 12th-ranked ACHA Division I men's hockey team strengthened its push to move into the top 10 by completing a sweep of No. 22 Alabama with an 11-2 rout, Saturday night at the LaHaye Ice Center.

The Flames (26-6) got goals from nine different players and extended their winning streak to 15 games, their longest run of success since 2009-10, when they opened the season with 16 consecutive wins.

"This is a fun group of guys," said Liberty Head Coach Kirk Handy, who eclipsed the 400-win mark for his coaching career in Friday's opener. "They're motivated and as a coaching staff, we want to refine every night and get better and that's what we did. We did a lot of things well tonight. Scoring was spread out around a bunch of different guys and we had all of the lines going for us."

After taking the Crimson Tide by storm in Liberty's first "Star Wars Night," the Flames opened a 4-0 lead in the first 11 and a half minutes of the rematch. Liberty needed just 45 seconds to ignite the top scoring line in ACHA DI when sophomore forward Quinn Ryan was tripped up while skating through the right circle but still managed to push the puck across the crease to senior Grant Garvin for a one-timed finish.

Flames freshman forward Sam Carlson extended the lead to 3-0 with two scores over the next five minutes, first cleaning up assists from sophomore forward Cody Clarke and senior defenseman Colt Steele out front. Then, moments after penetrating from the right corner and having his shot blocked by Alabama goalie Sam Schilling, Carlson received a feed from sophomore defenseman Chaydan Lauber in the left corner and fired a shot from a seemingly impossible angle that sneaked past Schilling top shelf.

Seconds into Liberty's first power play, junior defenseman Zane Schartz, playing in his 100th game for the Flames, made Alabama pay, capitalizing on assists from Ryan and junior forward Zechariah Roberts by rocketing a wrist shot from the top of the right circle into the top right corner.

Trailing 4-0 with 8:44 left in the first frame, the Crimson Tide replaced Schilling with Garret Kingsbury, Friday's starter who lasted one period before being relieved by Schilling.

After nearly 20 minutes of scoreless action, Alabama ended the shutout with 8:50 left in the second period when forward Dylan Teed finished a fast-break feed in front, trimming the deficit to 4-1. But the Flames responded 21 seconds later when sophomore defenseman Matt Cruickshank received a cross-ice pass from Jordan Bochinski and blasted a low shot from beyond the left circle. Fellow freshman forward Cole Gammer, skating through the left crease, trapped the rebound and slammed the puck into the right side of the net, extending the Flames' advantage to 5-1.

Liberty padded its lead to 6-1 with a beautifully executed give-and-go from freshman forward Devin Pierce on the left wing to Garvin, who pivoted with the puck deep in the left circle before sending a return pass to Pierce for a score from the slot at the 5:48 mark.

Then, with 1:31 to play in the second, Pierce started an odd-man rush by clearing the puck out of the defensive end to Garvin, who worked a give-and-go to Gammer through the high slot before finishing top shelf from the right crease, stretching Liberty's lead to 7-1.

Junior defenseman Kyle Crane sniped the Flames' eighth goal on the night with 17:47 left in the third period when he took a pass from Gammer and skated up the right wing before lifting a wrist shot into the top left corner.

Flames junior goalie Cole Burack went into the split position to make two spectacular saves of point-blank Alabama shots before defenseman Pierre Ouellette finally got one past him on a blast from the point, cutting the gap to 8-2 at the 10:42 mark.

Just over two minutes later, with 8:39 remaining in regulation, Bochinski received sophomore defenseman Garrett Nelson's pass from behind the net and shot it past Kingsbury from deep in the right circle. Liberty tacked on two goals in the final 2:25, with sophomore defenseman Basil Reynolds deflecting sophomore forward Victor Blomberg's shot from beyond the left circle into the upper netting before Lauber scored off passes from Ryan and Garvin with 1:19 to play.

The Flames outshot the Crimson Tide 44-27 and Burack finished with 25 saves.

Liberty will be back in action at the LaHaye Ice Center for a regular-season-ending series against West Virginia next weekend, with Friday's 7 p.m. opener the annual fundraiser for Gleaning for the World's Teddy Bear Brigade. Fans bringing a new or gently used stuffed animal, to be thrown onto the ice after the Flames' first score, will receive free admission. Saturday will be Senior Night, when Liberty honors Steele, forward Tim Bierema, and Garvin, the top scorer in ACHA DI.