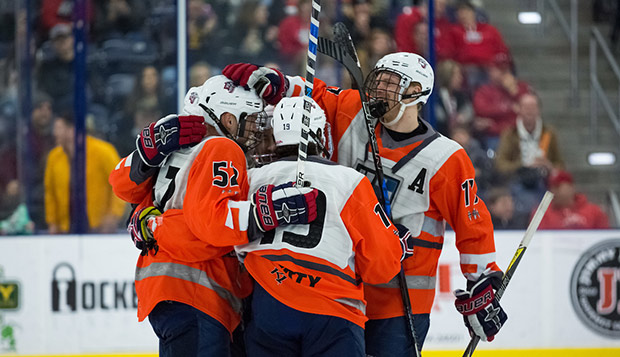 "It was awesome," Handy said after drying off from being showered by half a dozen of his players with water bottles during an on-ice, post-game interview with LFSN Video & Media Specialist Monika McKenzie. "It's not about me. I've been blessed to work with lots of great people. It's been a neat journey for me and my family. My wife (Jannie) has been very gracious to me over the years to support me."

Freshman Ryan Cox chipped in the rebound, top shelf, of a wraparound try by sophomore forward Josh Hamilton with 13:52 left in the first period for the Flames' first goal. Cox had won the faceoff back to sophomore forward Victor Blomberg, who fired on net from the top of the right circle to set up the score.

Just 47 seconds later, freshman center Devin Pierce found a seam in the right slot and put the puck into the upper netting to lift Liberty to a 2-0 edge with an unassisted power-play score, the first of three for the contest.

"Our special teams were great tonight," Handy said. "Our power play and penalty kill (5-for-5) were outstanding."

With the Flames back on a five-on-four, junior defenseman Zane Schartz received a short feed from senior forward Grant Garvin and unleashed a laser wrist shot from the high slot through a screen set by Garvin past Alabama goalie Garret Kingsbury into the top-right corner of the cage with 11:29 to play in the first period.

Fast forward three minutes and Liberty sophomore forward Quinn Ryan capitalized on a sneaky shot for the Flames' fourth score in his first game back from an arm injury. Freshman forward Cole Gammer stole the puck in the high slot and maneuvered between defensemen before flicking a cross-crease pass that skipped off the skate of Crimson Tide defenseman Stephen MacInnis to Ryan, who slipped his shot between MacInnis' legs past Kingsbury for a commanding 4-0 advantage.

Despite being checked along the boards, Garvin sent a pass to Ryan in the right circle who dished it to Gammer for a spectacular score with 1:22 left in the first. He skated the puck toward the right post, tucking it into the net before veering behind the cage.

In the second period, Liberty stretched its lead to 6-0 on a second-effort second score by Cox, who skated up the right wing and cut into the slot before finishing under the pads of sprawling Alabama replacement goalie Sam Schilling at the 15:04 mark. Then, with the Flames on the power play, sophomore defenseman Garrett Nelson received a pass from Gammer and launched a top-shelf wrist shot from the high slot, extending the advantage to 7-0 with 8:39 to play in the second.

Alabama struck back twice in the final two minutes of the second period, trimming the deficit back to five goals heading into the third period on scores by forwards Taylor Joseph and Dylan Teed. For the game, Liberty outshot the Crimson Tide, 47-20, with Flames junior goalie Cole Burack making 18 saves.

"We always want to get better," Handy said. "It's about us refining our game this time of the year. It's a complete team effort. We have to work hard. We want to make sure we're humble, hungry, and thankful."

In addition to the dozens of spectators who came dressed in Star Wars character costumes, the 501st Legion — which has generated more than $2 million over the past four years in movie-themed fundraisers — brought in 15 villains for the special occasion, with Darth Vader and two Stormtroopers accompanying the National Anthem singer out onto the ice and others offering photo opportunities with fans. The Rebel Legion also provided a few cosplayers and McKenzie delivered her first rink-side report while wearing a Yoda mask. Money raised from a jersey auction of the Flames' rebel fighter pilot uniforms raised nearly $1,000 for Orphan's Heart child sponsorship program. Even the two Zambonis were disguised as Clone Wars-era ground vehicles.

The Flames and Crimson Tide will meet again Saturday at 7 p.m. in the LaHaye Ice Center, with the rematch webcast live by the Liberty Flames Sports Network (LFSN) on both the Big South Network and WatchESPN.