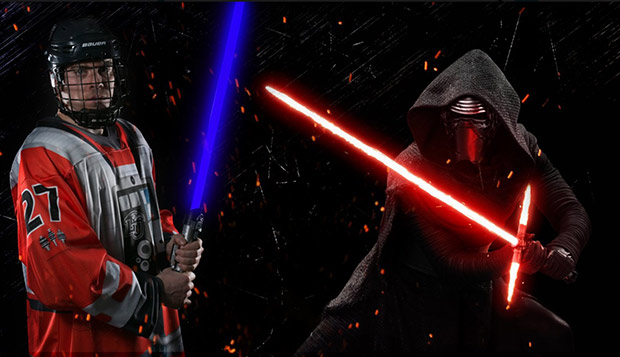 It seems like a long time ago, in a galaxy far, far away, that Liberty University's ACHA Division I men's hockey team hosted Alabama in the season-opening series, Sept. 15-16 at the LaHaye Ice Center.

The Flames and Crimson Tide split those games, as they had in home-and-away series in the 2016-17 season, when they met for the first time. Both teams have come a long way since then, heading into Friday's 7 p.m. clash, designated "Star Wars Night." When they emerge from the darkness and skate through the inflatable tunnel set up rinkside, Liberty's players will sport their sixth unique uniforms of the season, designed to make them appear like rebel fighter pilots.

Riding a 13-game winning streak, the Flames are certainly an awakened force to be reckoned with, no matter who they encounter. They are eager to gain as much momentum as they can in their final four regular-season games before defending their ESCHL Tournament title on Feb. 23-25, and competing in the ACHA DI National Championships, March 8-13 in Columbus, Ohio.

"For us, it's more about refining what we are doing," said Liberty Head Coach Kirk Handy, who can eclipse the 400-win mark of his 18-year coaching career with a win this weekend. "We're down to the critical part of our season."

Though Liberty will close its regular season with four games against non-ESCHL competition, concluding with a home series against West Virginia, there is still plenty for the Flames to fight for. If Liberty, which rose to No. 12 in this week's national rankings, can maintain or elevate that position in the final poll, it will avoid having to compete in the play-in round of games at the 20-team ACHA DI National Championships.

"I'm proud of our guys and we're real proud of the direction we're going, but we want to keep pushing and becoming better," Handy said. "They're a good team, we're a good team, and it will be a great weekend."

Liberty scouting report: The Flames have outscored opponents by nearly 100 goals this season, 163-67, and have executed especially well on special teams as of late, netting 13 power-play goals in the past four games. They feature not only the ACHA's top scorer, senior Grant Garvin (21 goals, 42 assists, 63 points), but the league's top-scoring defenseman, junior Zane Schartz (19G, 34A, 53 points), who is tied for third overall and has netted a league-leading 11 power-play goals.

Sophomore forward Brock Thompson (23G, 26A) is tied for second in the ACHA with 10 power-play scores and is the Flames' third-leading scorer, followed by sophomore forward Quinn Ryan (11G, 24A), who has missed the past five games due to injury, and freshman forwards Cole Gammer (11G, 21A) and Jordan Bochinski (10G, 11A).

In goal, the Flames feature junior Cole Burack (15-4, 1.89 goals-against average, 93.0 save percentage) who recorded his fifth shutout of the season in this past Saturday's rematch with Western Michigan. Fellow junior Josh Halpenny (9-2, 2.60 GAA, 89.4 SP) has provided solid backup in net.

Alabama lost three of its four goalies from last season, but have platooned Jesse Gordichuk (2.06 GAA, 93.8 SP, two shutouts) and Garret Kingsbury (3.30 GAA, 90.6 SP), who have each posted 9-3 records between the pipes.

Series record: The teams have split their first thee series over the past two seasons and are now 3-3 in head-to-head play.

Coaches: Handy is in his 18th season as the Flames' head coach and has compiled an overall record of 399-172-25. Kyle Richards, who formerly led ACHA DI West Virginia to a 21-16-1 record, is 19-6 in his first season as head coach of the Crimson Tide.