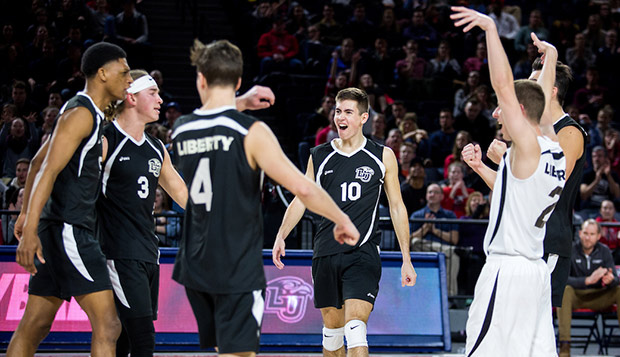 The Flames celebrate winning a point during the 'Midnight Mayhem' matchup with Florida on Jan. 27 in the Vines Center. (Photo by Andrew Snyder)

Liberty University's Division I and II men's volleyball teams were touted as two of the best in the nation in their respective fields in the first of four National Collegiate Volleyball Federation (NCVF) rankings of the spring season, released this week.

The Flames' DI squad, which finished 17-3-2 in the fall season, debuted at No. 11 while Liberty's DII team came in at No. 10 in the NCVF Division III rankings.

"Our teams are ranked higher than they've ever been," Flames Head Coach Bryan Rigg said, noting that they are 6-3 against teams in the top 25 polls, with their only losses to No. 5 Florida (DI), No. 20 James Madison (split squad), and No. 11 Purdue (DII).

If the Flames can maintain those rankings through the preliminary rounds of the April 12-14 NCVF National Championships in St. Louis, they would both compete in the Gold Bracket (for the top 16 out of 48 teams) at that event for the first time.

"It puts more of a target on us, but if we can be ranked in the top 16 by the time we get into the national championships, that will give us the best chance there," Rigg said.

Last year, both teams were eliminated in the first round of Silver Bracket play at the national tournament in Kansas City.

The Flames opened their spring season with the DII team sweeping Florida's DII squad, 25-, 25-Midnight Mayhem match against the Gators in the Vines Center, webcast live by the Liberty Flames Sports Network (LFSN) on both the Big South Network and WatchESPN.

On Saturday, both Liberty's DI and DII teams will compete at JMU for their only East Coast Volleyball Association (ECVA) regular-season play date of the spring season. The Flames will host the ECVA South Tournament for the first time on March 24 before traveling to the University of Maryland for the East Coast Championships, their final tune-up for nationals.

The next NCVF DI and DII rankings are scheduled to be released Feb. 28 with a third set posted on March 21 and the final polls, which will determine seedings at nationals, on April 7.