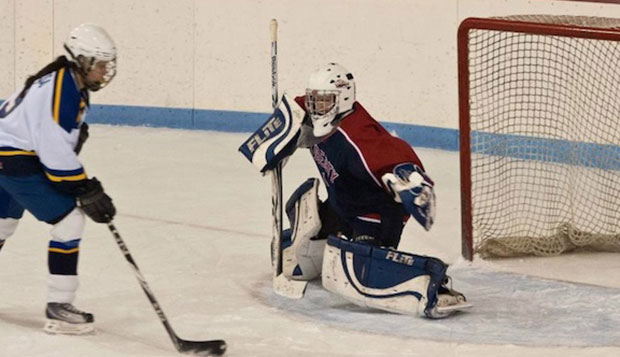 Lady Flames Division II hockey team goalie Leanne Niemi continues her strong play in the Delaware Valley Collegiate Hockey Conference where she is tops in saves with 427 and third in save percentage at .893. Her skill in net has garnered much attention around the league and Niemi has already been invited by the league commissioner to play in the DVCHC all-star game in April.

Niemi leads the saves statistic by more than 200 saves with the next-closest goalie at 194 saves.

Despite her strong defensive play the Lady Flames are having trouble on the other end of the ice and wrapped up their 2012 slate at 0-9.

Liberty hosted American University on Dec. 2 and fell 5-0. Before that the Flames played a home and home with the University of Virginia Nov. 17-18. At home the first night Liberty lost to the Cavaliers 8-0 before dropping the next one on the road 9-0.

Earlier in November the Lady Flames embarked on a road trip to Pennsylvania where they lost to West Chester University 9-0 on Nov. 10 and 4-1 on Nov. 11 to the Wildcats of Villanova University.

Rena Leone leads the Lady Flames in points with four, followed by Abby Wallace with three.

Sara Niemi, Lady Flames head coach said while the team is struggling to find a win, many of them are beginners this season and are developing.

Liberty will look to notch its first win on Jan. 26, 2013 as it hosts the Naval Academy in the LaHaye Ice Center beginning at 10 p.m.