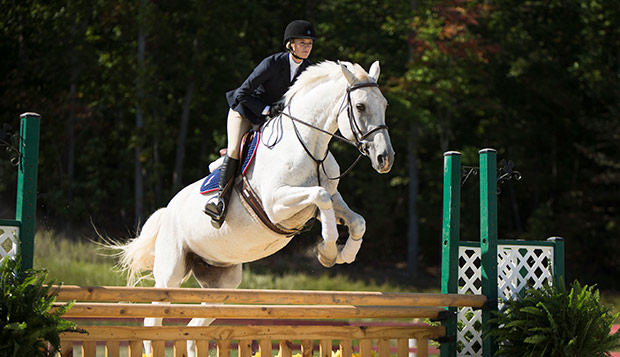 A Lady Flames Hunt Seat rider guides her horse over a jump at the Liberty Equestrian Center. (Photo by Jessie Rogers)

As Liberty University's Equestrian Center prepares to host its first Region 4 show in program history this Saturday, starting at 10 a.m., Hunt Seat Head Coach Suzanne Flaig has taken the reins as new director of the facility.

"I really look forward to watching the program grow and share all that this facility has to offer with Liberty students and other colleges that come in," Flaig said. "There's a lot of potential with the program in years to come."

Flaig succeeds Jim Arrigon, who spearheaded the property renovation and program elevation, hiring Lauren Eagles to coach the Western team and Flaig to lead the Hunt Seat program in 2016 before returning to Ohio this past fall.

Flaig said that while she, Eagles, and Hunt Seat Assistant Coach Kimi Counts are busy training horses and riders and recruiting prospective student-athletes on two different teams, her Equestrian Center staff teaches three kinesiology classes, runs a trail riding program, and operates a full-care boarding program out of the facility.

"It is certainly a busy time in our schedule, and we have a fantastic staff here that has varied skills to complement everything we are doing up here," she said.

The Equestrian Center will host the Feb. 24-25 Region 4 Championships, an individual competition that serves as the first tier of the IHSA postseason. That will be a qualifying event for the Zone championships hosted by Virginia Tech, with top finishers there going on to the May 3-6 IHSA National Championships in Harrisburg, Pa.

Liberty will travel to Fredericksburg, Va., for its final regular-season show on Feb. 17-18, when the regular-season team champion will be determined.

"It is a very close competition, with the top four teams pretty similarly matched," Flaig said, noting Randolph-Macon, located in Ashland, Va., leads Liberty by one point in the Region 4 standings with 167, followed closely by Sweet Briar College and Mary Washington University. "We do have the team to make a strong finish this year."

"Our Western team is sitting in third place with a strong chance to get riders to that event, too," Flaig said. "It would be exciting to have both English and Western riders represented in the national finals."