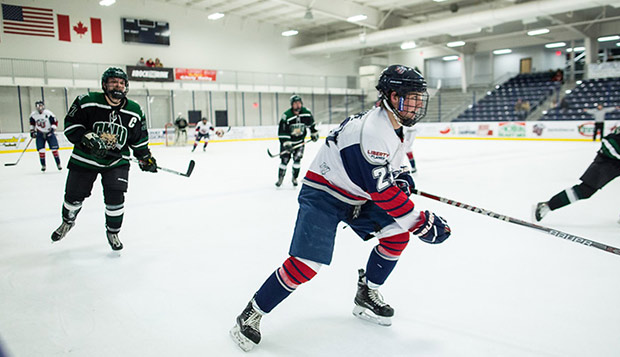 Liberty sophomore forward Jamie Crane skates along the boards against the Bobcats on Friday at the LaHaye Ice Center. (Photo by Joel Isimeme)

Liberty University's ACHA Division II men's hockey team salvaged a split in its final regular-season home series against Ohio on Saturday, regrouping from a 7-3 setback late Friday night to beat the Bobcats in the rematch, 6-1.

Paul Lamoureux lifted Liberty to a 1-0 lead with left in the first period of Friday's opener off an assist from senior forward Eric Masters. Ohio responded by scoring the next four goals to seize a 4-1 lead 5:30 into the third, when the Bobcats added three more goals to keep the Flames at bay. Freshman forward Blake Flanders and senior forward Marshal King also netted third-period goals for Liberty, which was outshot by Ohio, 42-38.

In Saturday's rematch, Masters started the scoring for the Flames with 13:06 left in the first period, receiving a beautiful fast-break saucer pass from sophomore Jamie Crane from the right wing before finishing inside the near post with a wrist shot in the left circle.

Liberty doubled its advantage at the 6:36 mark of the first period when sophomore forward Drew Crilly, who had a shot clang off the post less than a minute before, took a crisp outlet pass from Flanders, skated through the neutral zone and launched a shot from the high slot through the five hole of Ohio goalie Michael Lively.

Just a minute and a half later, sophomore forward Andy Clarke extended the Flames' advantage to 3-0 by cleaning up the putback of sophomore defenseman Jackson Roy's shot from the point, sticking it into the open right side of the net after it bounced around in traffic out front.

Bobcats forward Austin Reynolds ended the shutout at the 7:25 mark of the second period before Flanders capped a tic-tac-toe passing sequence from Crilly and Lamoureux with a wrist shot top shelf, lifting Liberty's lead to 4-1.

Then, with 6:43 to go in the game, Crane skated the puck around the back of the goal before rattling the cage with a sharp-angled wrist shot from the left circle inside the top left post. Just 44 seconds later, Flanders skated through the neutral zone and deked around defenders in the left circle before sending a cross-crease feed to Lamoureux for a one-timed shot, the game's final score.

The Flames will wrap up their regular season Saturday at 2 p.m. at the Berglund Center in Roanoke for the deciding game of the best-of-three Battle of the Blue Ridge before traveling to Rowan (N.J.) for the Mid-Atlantic Collegiate Hockey (MACH) playoffs Feb. 16-17.

Liberty will host the South Region playoffs from Feb.  23-25 at the LaHaye Ice Center, where it must win both of its games to qualify for the ACHA DII National Championships, March 9-13 in Columbus, Ohio.