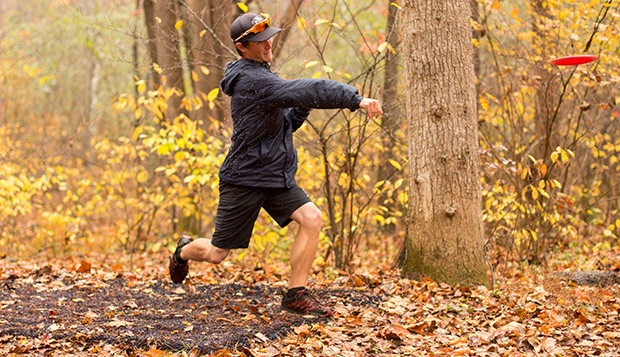 Christian Wilborn tees off during the Flamethrower Invitational held at Liberty's course near the Hydaway Outdoor Recreation Center on Nov. 4. (Photo by Kevin Manguiob)

Shumate fired a total score of 103 after two rounds on the 18-hole course to add to his 136.5 season point total. Junior teammate Zach Biscardi (108) placed second Saturday to move into third place in the Amateur standings behind Shumate and graduate Jeremy Miekley (120.5 points), who did not compete.

Flames sophomore Christian Wilborn finished fourth with a 112-stroke total to move up from eighth to fourth place in the amateur standings.

In the women's competition, Liberty graduate Heather Wyatt shot a combined score of 130 to win Saturday's event and all but clinch first place in the Ladies standings while junior Hannah Trotz strengthened her fourth-place overall standing by carding a 168 for fourth place.

"Some of the players went to a couple tournaments over Christmas break to get ready for the BRAWL Series, which is a great environment to get some pressure competing in singles play," Flames Head Coach Steve Bowman said. "Unlike in doubles play, there's no bailout. You've got to be precise and hit the shots that you need to on the course."

Liberty junior Hunter Thomas, who is sitting in seventh place in the BRAWL Open standings, missed his first tournament in the series as he was attending the wedding for former Lady Flames player Hannah Croke and Paul McBeth, a four-time Professional Disc Golf Association world champion who has conducted clinics at Liberty and practiced with the team in recent years. McBeth was tied for first place in the Open division before missing Saturday's event with Croke, who trails only Wyatt in the Ladies standings.

On Feb. 17, Liberty team members will travel to Greenfield Park in Daleville, Va., to compete in the seventh event in the series before concluding BRAWL competition March 3 at Big Ridge, a private course in Bedford, Va.

In early March, Liberty, the No. 6 team in the National Collegiate Disc Golf (NCDG) rankings, will send its top players to Clemson (North Augusta, S.C.) to compete in a qualifier for the April 11-14 NCDG Championships. Ferris State (Mich.), ranked third in the country, will also compete at that event along with several other teams from around the region.

In late March or early April, the Flames and Lady Flames will also travel to the Tri-State Challenge, featuring players from Emory & Henry, North Carolina, NC State, Virginia Tech, and others from North Carolina, Virginia, and Tennessee. That to-be-scheduled event will be Liberty's last competition before nationals and will help Bowman determine the third and fourth players on the Flames' championship squad.