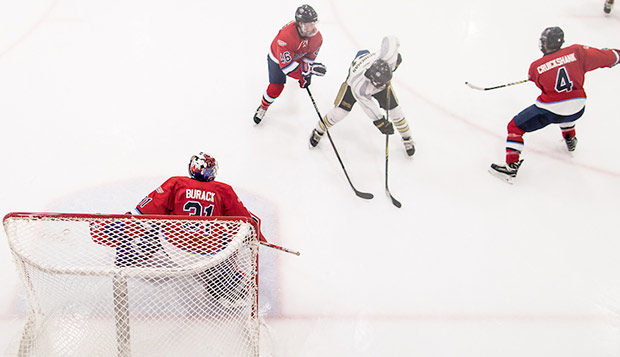 Junior goalie Cole Burack made 16 saves, stopping at least four breakaways and a flurry of shots early in the third period, to post his fifth shutout for the Flames. (Photo by Joel Isimeme)

Liberty University's ACHA Division I men's hockey team outshot Western Michigan by a 52-16 margin and turned in a more dominant performance than it had in Friday night's opener, winning the second-ever meeting with the Stallions 4-0 at the LaHaye Ice Center.

"It was huge to step it up and play better today than we did yesterday," sophomore forward Victor Blomberg said. "We talked about it last night, that we need to play better if we want to make some noise at (ACHA DI) Nationals," set for March 8-13 in Columbus, Ohio.

The Flames (24-6) showcased a more potent attack, getting two power-play goals and two at even strength, and a smothering defense, anchored by junior goalie Cole Burack, who posted his fifth shutout in his first season with the team.

"Last night we didn't play the way that we thought we could play and tonight we executed well," Liberty Head Coach Kirk Handy said. "For us, it's more about refining what we're doing and we really wanted to tighten up our defensive side of the game and we did that tonight."

Blomberg punched in the Flames' first goal with 12:37 left in the first period, cleaning up freshman forward Ryan Cox's redirect of a shot from along the left boards by sophomore defenseman Matt Cruickshank.

Freshman forwards Cole Gammer and Jordan Bochinski generated quality scoring chances on Liberty's first power play. Seconds after the advantage expired, senior forward Grant Garvin added to his ACHA DI-leading scoring total with his 21st goal of the season, putting away a shot from the right wing by junior forward Zechariah Roberts at the 9:58 mark.

Western Michigan (11-17-2) came out on the offensive at the start of the second period and generated a few one-on-one opportunities with Burack, who was able to repel each one, including a shot from deep in the right circle by Brandon Grillo at the 2:25 mark.

Liberty capitalized on a counterattack to pad its lead to 3-0 a minute and a half later when Garvin created a fast break by skating the puck through the neutral zone. He dished it ahead to senior linemate Tim Bierema, who made a diving stab at it to slide it past Western Michigan goalie Sam Woznicki a split second before crashing into the cage.

"That was a huge goal at the end of the second period," Handy said. "He was going up the ice hard, puts a second effort into it by diving ahead and buries it."

"We challenged our guys and it was really encouraging to see our leaders step up for us tonight," Handy said.

Five and a half minutes into the third period, Burack was at his best in fending off a flurry of shots from all different angles during a five-second assault on the Flames' goal, lunging, spinning, and diving to block and smother the puck, preserving the shutout.

Sophomore forward Brock Thompson and Schartz had excellent shots denied from deep in the right circle on glove saves by Woznicki in the top right corner before Liberty finally capitalized on a four-and-a-half-minute unreleasable five-on-four. Sophomore defenseman Garrett Nelson received feeds from Gammer and freshman forward Devin Pierce before unleashing a rocket from beyond the top of the right circle into the top left corner of the netting for the final score with 4:04 to play.

Liberty will take a 13-game winning streak, their longest since 2009, into a rematch of their season-opening home series against Alabama, starting with the first "Star Wars Night" at the LaHaye Ice Center on Friday at 7 p.m.