Flames ride to top of podium at Massanutten competition 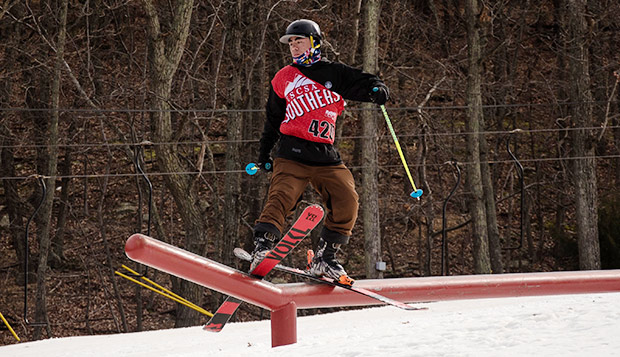 Freshman snowboarder Owen Hewitt landed in first place out of 73 competitors in the men's slopestyle competition with an overall best score of 6.37 on a 10-point scale, a full point in front of North Carolina State's runner-up Duncan Nielander (5.37).

"Owen was one of the few competitors who was able to put down a clean run," Flames Head Coach Isaac Gibson said, noting many riders slipped out early on the rails or fell at some point as they navigated their way through three of the six optional features that included an A-frame box, a flat box with a cannon jump, a flat-down tube rail, and a down-flat-down box. "The rails were a little more difficult, longer, higher, and more technical, than any we've seen this year. The scores were pretty low because of that. No one really rode at their best."

Junior Garrett Long took third place with a run of 4.52 followed by sophomore Lee Patton's fourth-place showing of 4.08. Sophomore Tyler Wilson placed 11th with a 3.29, followed by freshman Payton Fedako, who came in 12th with a 3.12.

NC State had the sixth-place rider and host JMU posted fifth- and seventh-place finishes but neither could keep pace with Liberty's 1-3-4 combination.

In the 22-skier competition, Flames freshman Cole Loomis placed second with a best run of 7.5 followed by junior teammate Jonathan Wong, who was third with a 7.36, and sophomores Jeffrey Loftus (sixth, 4.95) and Chris Yablonski (10th, 4.08).

Before competing in the USCSA Mid-Atlantic Regionals, set for Feb. 25 at Wintergreen Resort, where its travel team members have season passes, Liberty will travel to Big Boulder (Pa.) Resort in the Poconos Mountains on Feb. 9-11 to practice on the types of jumps it can expect to see at the March 4-10 USCSA National Championships on Whiteface Mountain in Lake Placid, N.Y.

"The main thing we're not able to train on in the Southeast because of lack of snow is big jumps," Gibson said. "The great thing about Big Boulder is that it has a line of five jumps which start off smaller, around 15 feet, and get continually bigger as you progress to the bottom, where they reach up to 50 feet. That run will give us great practice hitting jumps similar to what we'll see at nationals."