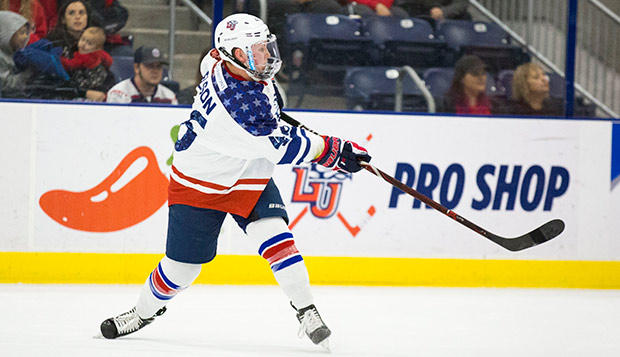 Liberty sophomore defenseman Garrett Nelson is expected to be available this weekend for his first home games since injuring his leg in this Nov. 4 loss to Stony Brook. (Photo by Jessie Rogers)

For the third consecutive week, Liberty University's ACHA Division I men's hockey team came in at No. 13 in the ACHA DI rankings, released on Wednesday.

But the Flames, who clinched their first ESCHL regular-season title and an autobid to the ACHA DI National Championships with a sweep at defending league champion Delaware last weekend, are in a virtual four-way tie for 10th with Iowa State, Jamestown (N.D.), and UNLV.

"That just shows you how tight it is," said Liberty Head Coach Kirk Handy, who is preparing the Flames for this weekend's first-ever meeting with Western Michigan at the LaHaye Ice Center.

"It's good to be back at home," Handy said. "We haven't played Western Michigan but we have played a lot of teams in their (Great Lakes Collegiate Hockey League) conference — Davenport, Oakland, Eastern Michigan, Rochester College, Adrian. It's a strong conference. Game-in and game-out, Western Michigan plays a strong schedule and we're looking forward to them coming in."

The Flames, who are riding an 11-game winning streak, have just three more regular-season series before attempting to defend their ESCHL Tournament title on Feb. 23-24, their final tune-up for nationals, set for March 8-13 in Columbus, Ohio.

"We're coming down to the final months of the season and we're excited to keep moving this thing forward," said Handy, who will have all but sophomore forward Quinn Ryan and sophomore defenseman Jacob Fricks available this weekend. "The real encouragement for us is we've seen a complete team effort. Guys have been out of the lineup and other guys have jumped in and been able to step up and it's been great to see."

Liberty converted eight out of 12 power-play opportunities at Delaware, while its penalty kill allowed only one power-play goal.

"We want to make sure that we're ready to go Friday night and that we're fine-tuning our game before going into the playoff run," Handy said.

Liberty scouting report: The Flames bring the top scoring line in ACHA Division I, paced by senior alternate captain Grant Garvin (20 goals, 39 assists), who ranks first in the league with 59 points. Sophomore linemate Brock Thompson (22G, 24A) has netted a team-high five game-winning goals while junior defenseman Zane Schartz (18G, 33A) ranks second in scoring and is tops on the team with 10 power-play scores.

All-time series: This is the first meeting between Liberty and Western Michigan.

Coaches: Handy is in his 18th season as the Flames' head coach with an overall record of 397-172-25. Chris Brassard is in his fifth season as head coach of the Stallions and has compiled a 74-82-17 record.